Despite Conflicts, Mideast Research Center To Launch In Fall

A top-notch research center that brought together Iran, Israel and other Mideast antagonists is launching operations this fall in hopes of boosting scientific discovery with the help of a powerful microscope and opening a window to a better future for a region beset by war, boycotts and closed borders. 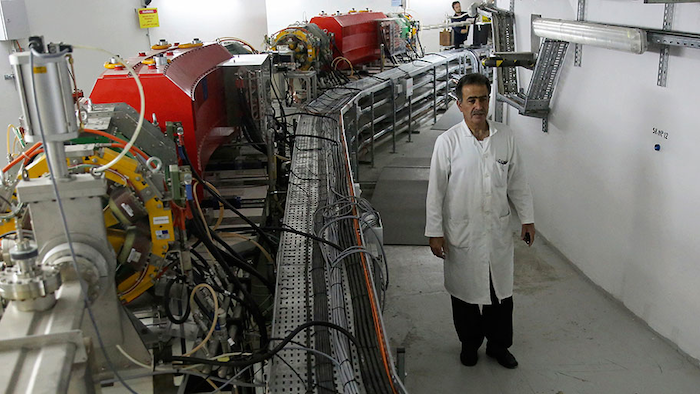 ALLAN, Jordan (AP) — A top-notch research center that brought together Iran, Israel and other Mideast antagonists is launching operations this fall in hopes of boosting scientific discovery with the help of a powerful microscope and opening a window to a better future for a region beset by war, boycotts and closed borders.

It's been a tough journey since groundbreaking in 2003, marked by political rows and the 2010 assassination of an Iranian scientist linked to the project.

Perhaps even more threatening were chronic funding shortages, said Khaled Toukan, the Jordanian director of the project, known by its acronym, SESAME.

The undertaking was at risk of collapse several times, but has reached a point of no return, he said in an interview.

"It is working, and I am surprised," he said of the rare collaboration of eight members that also include Egypt, Turkey, Cyprus, Pakistan and the Palestinian Authority, a self-rule government in parts of the Israeli-occupied West Bank.

The centerpiece of SESAME is a synchrotron light source — essentially a powerful microscope — that fills a large hangar in the countryside of western Jordan, about 35 kilometers (22 miles) from the capital of Amman.

The contraption zaps electrons through a circular tube at near the speed of light, generating intense light beams. Researchers can train these "beam lines" on their subject of study, from cells to materials, in a wide range of disciplines, from medicine and biology to archaeology and environmental science.

The first two lines will start operating by November, and dozens of researchers have applied for "beam time," said Toukan. In all, two dozen lines are to be set up eventually, in hopes of drawing hundreds of researchers from the region.

Israel's Science Ministry reported a growing interest in the project among Israeli scientists.

During a visit to SESAME last week, physicists and engineers, among them an Iranian, an Egyptian and a Palestinian, were working quietly on the beam lines.

Hossein Khosroabadi, 40, a physicist from Tehran, said the secret for getting along is to focus on the science. "If you start talking politics, it makes a problem for us," said the beamline specialist.

Egyptian physicist Gihan Kamel, 41, said she hopes SESAME will open doors for women in science. The research center will enable female graduate students and doctoral candidates to conduct their research in the region, sidestepping cultural norms that often deter Arab women from traveling to the West on their own.

Yet even at SESAME, where the pursuit of science is meant to transcend barriers, traditional gender roles creep in, said Kamel, a beamline scientist.

As the only woman on the advance team of the project, she said she always has to prove she's good enough for the job.

Plans for an advanced regional research center go back to the late 1990s, a hopeful period in which Israelis and Palestinians reached interim peace deals, or Oslo Accords, that were to lead to Palestinian statehood on lands Israel occupied in 1967.

The idea to forge meaningful scientific contacts in the Middle East came from scientists involved with CERN, the European Organization for Nuclear Research, one of the first European organizations established after the devastation of World War II.

CERN dwarfs SESAME in many ways, including with a particle accelerator that at 27 kilometers (16.8 miles) is more than 200 times longer than the one in Jordan.

But the idea of science as a tool for breaking down barriers is central to both.

Among the early CERN-affiliated scientists who spotted the potential was Eliezer Rabinovici, a physicist at the Hebrew University of Jerusalem.

After the Oslo Accords, "we thought maybe that's the moment when one can try and establish a bridge of understanding between Israelis and our neighbors, the Arabs," Rabinovici said.

Palestinian accelerator physicist Maher Attal, who has been with the project from the start, recalled the elation of scientists over each milestone, including in April when they ramped up the electrons to full speed.

"We were just shouting and shaking hands with each other," said Attal, 43, from the town of Qalqiliya in the West Bank.

Scraping together some $100 million for the first phase of the project was a struggle. Donors included the European Union and member states. Jordan also provided the land and the building. Still missing are a dormitory, offices and a cafeteria. "We only built the core of the facility," said Toukan.

Disagreements are aired at biannual meetings of SESAME's governing council which includes representatives of member countries and observer states such as France, Germany, Britain, Japan, Russia and the United States. UNESCO, the U.N. agency promoting culture and science, is a sponsor.

He said Israel threatened to walk out when the Palestinians demanded to be listed in the charter as "state of Palestine," in line with a 2012 U.N. General Assembly upgrade of their status at the world body.

Arab member stations persuaded the Palestinians to hold off in order not to endanger the project, said Toukan. Israel's Science Ministry said it can't comment on the content of closed-door meetings.

A deadly clash on the high seas between Israeli troops and Turkish pro-Palestinian activists was also "a very tense moment," Toukan said. Nine Turkish activists were killed in 2010 when Israeli commandos boarded a vessel trying to break Israel's blockade of Gaza, ruled by the Islamic militant Hamas.

Iranian physicist Massoud Ali Mohammed was assassinated by a motorcycle bomb outside his Tehran home in January 2010, several days after attending a SESAME council meeting in Jordan, said Toukan. Despite the fallout, including Iran blaming the U.S. and Israel, the next council meeting was held six months later.

More bumps are likely, but Toukan said he believes SESAME can no longer be derailed.

"We might lose one or two countries on the road, and we might get other countries," he said. "But I think now SESAME is solid on the ground."