Repairing the nation's crumbling roads and bridges was supposed to be an area ripe for bipartisan compromise between congressional Democrats and President Donald Trump. Instead, Democrats are panning Trump's proposed $1 trillion overhaul, the White House is signaling plans to go it alone, and even Republicans are balking at some aspects of the emerging plan. 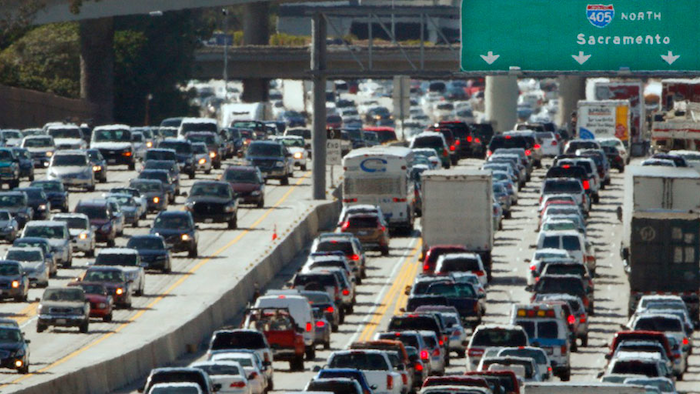 WASHINGTON (AP) — Repairing the nation's crumbling roads and bridges was supposed to be an area ripe for bipartisan compromise between congressional Democrats and President Donald Trump. Instead, Democrats are panning Trump's proposed $1 trillion overhaul, the White House is signaling plans to go it alone, and even Republicans are balking at some aspects of the emerging plan.

The White House's self-proclaimed "Infrastructure Week" began with Trump appearing Monday with aviation officials and some prominent GOP lawmakers to announce plans to privatize the nation's air traffic control system and separate operations from the Federal Aviation Administration. "We live in a modern age yet our air traffic control system is stuck, painfully, in the past," Trump said, noting the FAA had been working to upgrade the system for years.

But the proposal quickly drew bipartisan opposition, and there were few signs it would get far on Capitol Hill. "All but our largest airports nationwide stand to be hurt by this proposal," said Sen. Jerry Moran, R-Kansas.

Next up will be a series of events throughout the week, including some with the nation's mayors and governors, that will allow Trump to highlight his effort to muster public and private funding to overhaul the highway, waterway, electrical and airway systems on which the nation depends. The president plans to travel to Ohio on Wednesday to address ways of improving levees, dams and locks along inland waterways that are crucial to agricultural exports.

The details of the plans must still be fleshed out. According to Trump's budget proposal, the funding would come from $200 billion in tax breaks over nine years that would then — in theory — leverage $1 trillion worth of construction.

But although the goal of upgrading crucial infrastructure has broad support, Democrats do not like Trump's plan for paying for it, arguing that his approach would result in taxpayer-funded corporate profits at the expense of investments in rural areas where money-making opportunities are scarce.

"A private-sector-driven infrastructure plan means tolls, tolls, tolls — paid by average, working Americans," said Senate Minority Leader Chuck Schumer of New York. "It also means that infrastructure that can't be built with tolls, like repairing our crumbling schools, for instance, will likely get left behind."

That's a far different view than Schumer had in the days immediately after Trump's election, when he told The Associated Press that infrastructure investment was an area where Trump appeared more aligned with Democrats than with Republicans. Indeed Schumer said that he'd spoken with Trump, offering his own support for a large infrastructure package but warning that conservative Republicans were unlikely to go along.

Conservative opposition remains a potential roadblock to Trump's infrastructure plans. Nonetheless, the White House appears to have all but abandoned hope for bipartisanship on the issue.

In a briefing Monday night, the White House legislative affairs director, Marc Short, indicated the administration plans to advance the infrastructure package via special budget rules that would allow it to pass with a simple majority vote in the Senate. That means that if Republicans can stick together — and there's no guarantee they can — Democratic votes would not be needed, although Short said that "we would hope to get some Democrats' support."

"Infrastructure, the president's said all along he believes to be a bipartisan exercise and it's one that we will be looking to partner with them on," Short said.

Democrats said any chance for such a partnership was ruled out by Trump's private sector approach. Democrats' preferred method is to simply add $1 trillion to the deficit to pay for a range of infrastructure needs. Democrats drew up their own $1 trillion infrastructure blueprint in January, which they claimed would create 15 million jobs over 10 years, and submitted it to the White House. They never received a response, according to Schumer spokesman Matt House.

The White House and Republicans are already proceeding on a partisan basis with their other two big legislative projects, health care and taxes, with uncertain chances for success on both. The fact that infrastructure now appears to have turned into a partisan exercise, too, underscores the poisonous atmosphere in Washington as an undisciplined president courts controversy over Twitter and an angry liberal base goads Democratic lawmakers to battle him at every turn. The investigation into Russian election meddling and ties with Trump's campaign hang over everything.

"This is not what he campaigned on and I think his voters are going to figure that out, sooner rather than later," said Sen. Chris Murphy, D-Conn.