South Korea's new president is taking on a challenge that has defied all of his predecessors: reforming the big family-controlled conglomerates that dominate the economy. 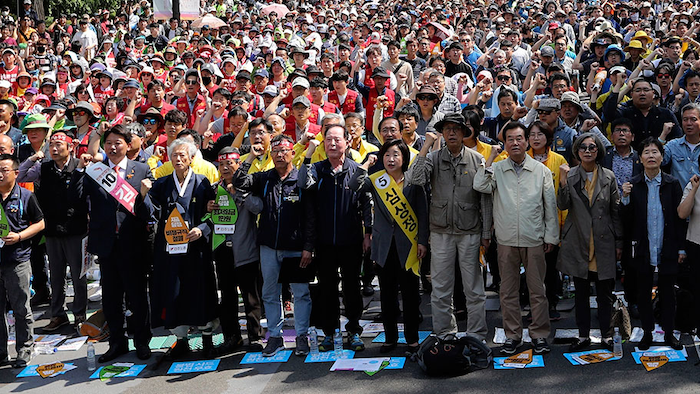 SEOUL, South Korea (AP) — South Korea's new president is taking on a challenge that has defied all of his predecessors: reforming the big family-controlled conglomerates that dominate the economy.

While jobs are a top priority, strong public pressure following a corruption scandal that toppled his predecessor, Park Geun-hye, leaves him with little choice about going after the chaebol, as they are called.

"As I promised during my campaign, I will take care of the employment issue first. At the same time, I will take the initiative in reforming chaebol," Moon Jae-in said in his inauguration address Wednesday.

"Under the Moon Jae-in administration, the word meaning cozy relations between political and business circles will completely disappear," he proclaimed.

Moon knows firsthand that the job won't be easy. He was a top aide in the administration of the late president Roh Moo-hyun's, whose efforts to rein in the chaebol yielded disappointing results.

Conglomerates like Samsung and Hyundai play a huge role in South Korea and their founding families have complicated stock ownership structures, non-profit charity foundations and other arrangements to preserve their wealth and managerial influence.

Many view close, murky ties between politicians, bureaucrats and those big businesses as the reason corruption has thrived.

The public mood following former President Park Geun-hye's impeachment over alleged influence peddling and bribery may give Moon a bit of a honeymoon.

"I'd like to hope that this government will be different," said Kim Seong-jin, a lawyer at People's Solidarity for Participatory Democracy, one of the largest civic groups in South Korea. "This is an essential task that the citizens are watching closely."

Moon has promised to empower South Korea's fair trade regulator to impose harsher punishments on companies that meddle in regulatory investigations and decisions. To do so he must drum up support from other parties. Passage of needed revisions of commercial and fair trade laws would require 60 more votes than the 120 out of 299 legislative seats controlled by his Democratic Party.

His presidency comes at a time of growing recognition that South Korea needs to end the chaebol-centered growth model that has been in place since the era of former President Park's father, who ruled from 1961-79.

Park Chung-hee, an army general-turned-dictator, gave cheap loans and trade protection to chaebols while quashing unionized labor. That enabled the conglomerates, and South Korea itself, to recover quickly from the devastation of the 1950-53 Korean War.

That top-down business model, largely driven by exports, is wearing thin as job creation and increases in wages slow. For decades, businesses and capital investment were prioritized at the expense of workers' rights and social welfare. Now consumer spending is suffering as families feel the pinch of job insecurity and lagging incomes.

South Koreans who in the past may have viewed the chaebol as national champions now increasing consider them elites who are hogging wealth while crushing small businesses and stifling innovation.

There are limits to how far reforms can go.

Most of the country's small and medium-sized companies depend on business from the chaebol, as suppliers or subcontractors, though they complain of not getting fair prices for their work. And jobs at chaebol like Samsung and Hyundai are considered the most desirable, given the uncertainties and poorer conditions of employment in most smaller companies.

Millions of South Koreans took to the streets for months in peaceful but vehement demonstrations to protest over allegations that Park, the former president, was colluding with a close associate and allowing her to meddle in government affairs, brought

Park was impeached and arrested in March and faces a trial later this month that could send her to prison for life if she is convicted. Meanwhile, Samsung vice chairman and chaebol heir Lee Jae-yong is facing trial, charged with using Samsung funds to bribe Park and her friend.

One other way to push for reforms is to have the powerful national pension fund, the biggest investor in many chaebols with $530 billion in assets, advocate more forcefully on behalf of minority shareholder and public interests.

So far, the pension fund has refrained from voicing criticism over corporate mismanagement. Former pension fund executives are among those facing trial in the current corruption scandal.

The tendency of chaebol companies and other institutions to favor founding family interests over those of ordinary shareholders in publicly listed companies is so ingrained that many global investors say they routinely impose a "Korea Discount" on investments in South Korea.

"This election proves there is strong public support for a better system of governance," said Kwon Young Sun, an economist at Nomura Securities.

"If corporate governance of Korea Inc. were to improve meaningfully with the passage of the economic democracy reform bills and adoption of a Stewardship Code by the National Pension Service, we would become more bullish on the market."