A South Korean court has begun reviewing the arrest of a Samsung Electronics vice chairman who faces allegations of bribery, embezzlement and perjury. 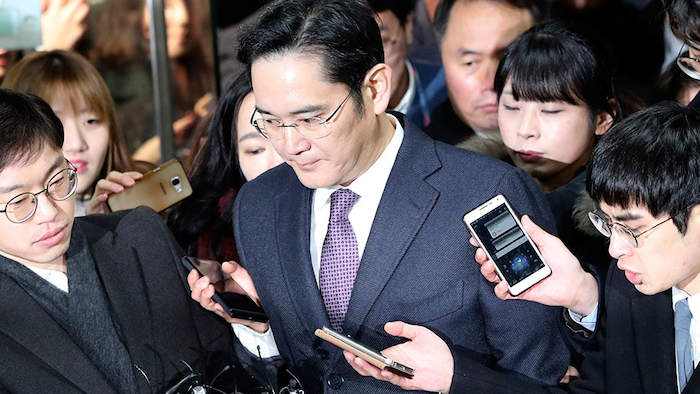 Lee Jae-yong, the only son of the Samsung chairman, has arrived Wednesday for the hearing at the Seoul Central District Court but said nothing to the huge media gathering awaiting him outside the court.

If the court approves the arrest, prosecutors will be able to detain Lee for a period of time set by the court before they formally bring charges against him. It would mark a stunning fall for a member of the business elite leading South Korea's most successful company.

A special prosecution team investigating the influence-peddling scandal that led to the impeachment of President Park Geun-hye requested Lee's arrest, accusing the Samsung heir of bribing Park and her friend who faces a trial for secretly meddling in state affairs.

The 48-year-old faces allegations of giving bribes worth 43 billion won ($36 million) to Choi Soon-sil, the president's confidante, and the president to win the government's backing for a 2015 Samsung merger that was crucial as Samsung prepared the leadership succession from Lee's ailing father to Lee. The younger Lee has been serving as its de facto head since his father suffered a heart attack in 2014.

Lee also faces allegations of embezzlement and of lying under oath during a parliamentary hearing last month.