Gun control has become a central cause of her presidential bid in recent months after a series of mass shootings reignited debate over gun laws. 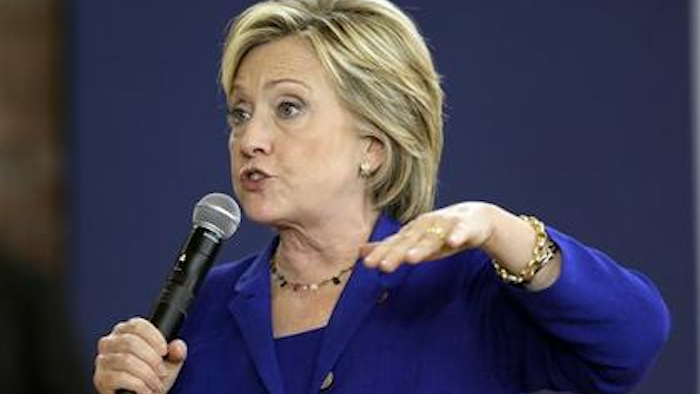 MANCHESTER, N.H. (AP) — Hillary Clinton is issuing a fresh plea for stricter gun control after a mass shooting at a social service facility in southern California, saying that no parent should have to worry about being killed at a holiday party.

"I don't believe we can stop every incident of gun violence but we can stop a lot of them," said Clinton, speaking at a Women's Economic Opportunity Summit at Southern New Hampshire University. "We need to take action now."

Clinton appeared in the early primary state a day after a couple killed 14 people at a holiday banquet in San Bernardino. While officials have shied away from calling the attack terrorism, they're treating the investigation as a counterterrorism inquiry.

Clinton stressed that she wanted people to "feel safe" but urged them not to vilify Muslims as a result of the attack.

"It's important to remember the vast majority of Muslim Americans are just as concerned and heartbroken about this as anyone else," said Clinton. "No matter what motivation these killers, these murderers had we can say one thing for certain: They should not have been able to do this."

Though gun control did not even merit a mention in Clinton's campaign kickoff speech last April, the issue has become a central cause of her presidential bid in recent months after a series of mass shootings reignited debate over gun laws. She nearly always mentions it in her stump speech, occasionally features families of victims in her events and even released an ad focused solely on the topic.

Promising to go farther than President Barack Obama, Clinton has vowed to use executive power to expand background checks for sellers at gun shows and online.

And she's proposed repealing legislation that shields gun manufacturers, distributors and dealers from most liability suits, even in the case of mass shootings.

In New Hampshire, she pressed Congress to pass legislation prohibiting individuals on the Federal Bureau of Investigation's no-fly terror list from purchasing guns. House Republicans have said they do not plan to aggressively pursue new gun legislation