Right-To-Work Bills Introduced In 16 States, But Enacted In Just One 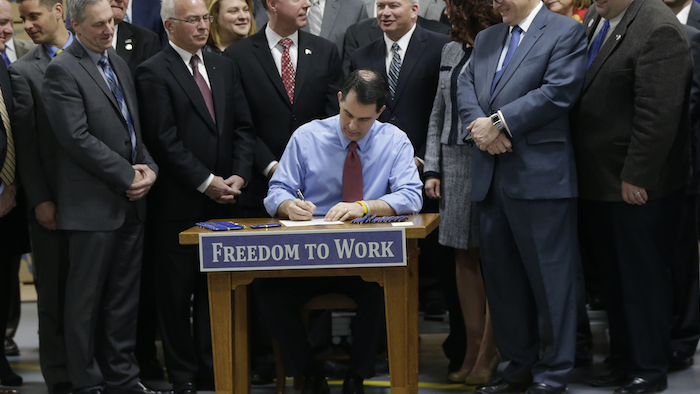 Sweeping gains by Republicans in last fall's midterm elections led to speculation that more states would join the ranks of those with right-to-work laws on the books.

Right-to-work laws prohibit automatic collection of union dues and ban membership in a union as a condition of employment.

Supporters argue that workers should not be forced to join a union and that the laws make states more attractive to businesses. Critics counter that they undermine unions and ultimately suppress wages.

Wisconsin became the 25th right-to-work state early this year. Despite initial resistance by Republican Gov. Scott Walker, GOP majorities in the Legislature quickly advanced the bill and the governor signed it in March.

Republican lawmakers in Missouri also passed a right-to-work bill, but Democratic Gov. Jay Nixon vetoed it and the vote appears unlikely to result in a veto override when lawmakers reconvene later this year.

Virginia, which has had a right-to-work law for nearly 70 years, passed an amendment that could lead to a statewide referendum on the issue next year. An Oregon ballot initiative fell short, while an Ohio commission is considering an amendment.

The Pew report also indicated that lawmakers in more than a dozen states introduced legislation to repeal or curb prevailing wage laws, which establish pay — often a union standard — for work on public projects.

Lawmakers in Indiana, Nevada, Virginia and West Virginia passed them, while Wisconsin could be next.