The number of people seeking U.S. unemployment aid plunged last week to the lowest level in nearly 42 years, evidence that employers are holding onto their staffs and likely hiring at a steady pace 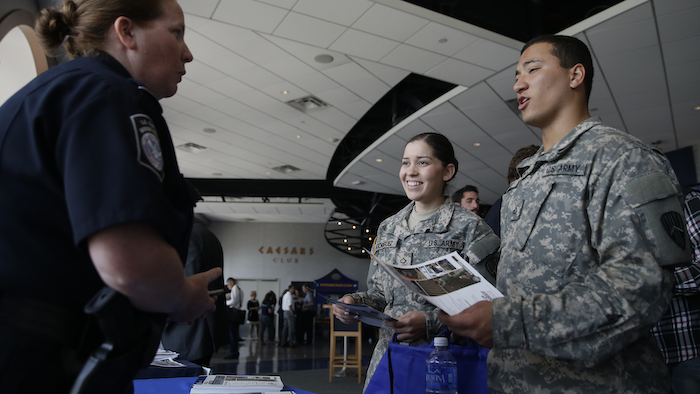 WASHINGTON (AP) — The number of people seeking U.S. unemployment aid plunged last week to the lowest level in nearly 42 years, evidence that employers are holding onto their staffs and likely hiring at a steady pace. Yet the drop also reflects seasonal volatility in the data.

Weekly applications for unemployment benefits fell 26,000 to 255,000, the lowest level since November 1973, the Labor Department said Thursday. If the data were adjusted for the growth of the U.S. population since then, last week's figure would likely be an all-time low.

One reason for the drop, however, is that auto plants and other factories close briefly in July to prepare for next year's models. That pushed up applications in the previous two weeks. Now that many factories have reopened, applications have fallen back.

"We should always take this summer period for claims with a grain of salt," said Jennifer Lee, an economist at BMO Capital Markets. "From a long-term perspective, we're still looking at claims bobbing around at the lowest level in ages."

Applications are a proxy for layoffs, so the drop means companies are cutting few jobs. Applications have been below 300,000, historically a very low level, since March.

"Employers are holding tightly onto their staff," said Ian Shepherdson, chief economist at Pantheon Macroeconomics. "This is the flipside of the difficulty they report in finding qualified people."

With layoffs down, employers are also hiring more to meet greater demand for their goods and services. The economy added 223,000 jobs in June, and the unemployment rate fell to a seven-year low of 5.3 percent.

The economy has gained nearly 3 million jobs in the past year. With that many more people earning paychecks, economists forecast that spending should pick up and help fuel growth for the rest of this year.

Even so, there are some signs of ongoing weakness in the job market.

And average hourly pay was unchanged last month from May. Pay has risen at roughly a 2 percent annual pace since the recession ended in 2009, below the 3.5 percent typical in a healthy economy.

That sluggish wage growth is likely keeping spending from increasing as much as the healthy job growth would suggest. Sales at retailers and restaurants fell last month, the government said earlier this month.

Yet home sales have picked up, and Americans are buying more cars. Sales of existing homes jumped in June to an eight-year high.

Analysts expect the economy will expand at about a 2.5 percent annual rate in the second quarter, after contracting 0.2 percent in the first three months of the year.