Coca-Cola said its profit rose in its second quarter as it raised prices, cut costs and benefited from a gain related to its purchase of a stake in energy drink maker Monster Beverage. 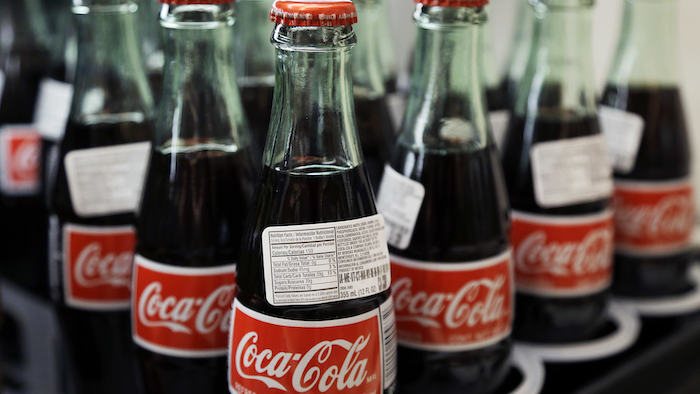 ATLANTA (AP) — Coca-Cola said its profit rose in its second quarter as it raised prices, cut costs and benefited from a gain related to its purchase of a stake in energy drink maker Monster Beverage.

The Atlanta-based maker of Sprite, Dasani and Powerade said global beverage volume rose 2 percent in the quarter, with revenue climbing 4 percent when stripping out the impact of structural changes and currency exchange rates.

To offset slower growth and improve its financial performance, Coca-Cola has said it would slash costs and pour some of that money into increased marketing. With Americans cutting back on soda, the company has also been shifting its strategy to lift prices and promote packages like mini-cans and glass bottles that tend to cost a little more.

In a phone interview, Coca-Cola Chief Financial Officer Kathy Waller said the company raised prices "across all of our packages" during the period.

In North America, Coca-Cola said core revenue growth of 5 percent was driven by higher pricing and a more favorable mix of products. Its volume of carbonated drinks in the region rose by 1 percent, boosted by its expanded distribution of Monster energy drinks.

As part of its deal to buy a stake in Monster, Coca-Cola sold its own energy drink brands to Monster. That resulted in a gain during the quarter.

For the quarter ended July 3, Coca-Cola Co. said its profit rose to $3.11 billion, or 71 cents per share. Not including one-time items such as the gain related to the Monster deal, it said it earned 63 cents per share. Analysts on average expected 60 cents per share, according to Zacks Investment Research.

A year earlier, the company earned $2.6 billion, or 58 cents per share.