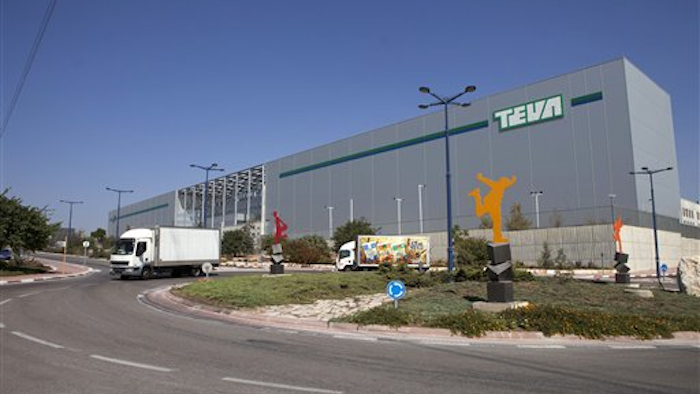 Statements from both companies say the deal will see Allergan receive $33.75 billion in cash and shares of Teva valued Monday at $6.75 billion. In light of the acquisition, Teva said it was withdrawing its $40 billion-plus takeover offer for pharmaceuticals company Mylan N.V.

Word of the acquisition saw Teva shares shoot up 13 percent in pre-opening trading on the Nasdaq. Trading in Teva shares on the Tel Aviv Stock Exchange halted over the news of the sale.

The Israeli pharmaceutical giant is the world's largest generic drugmaker. It said in a statement that the acquisition would provide patients with more access to affordable medicines.

"Through our acquisition of Allergan Generics, we will establish a strong foundation for long-term, sustainable growth, anchored by leading generics capabilities and a world-class late-stage pipeline that will accelerate our ability to build an exceptional portfolio of products - both in generics and specialty as well as the intersection of the two," Erez Vigodman, president and CEO of Teva, said in a statement.

Brent Saunders, CEO and president of Allergan, said in a statement the sale would help his company enhance its "global-branded pharmaceutical business and strengthen our financial position."

Teva's leadership has been saying for months that it believes some of the biggest generic drug companies should combine in order to save money and become more efficient.

A big deal like this would allow the drugmaker to improve its profitability by cutting jobs and other overlapping costs from the combined businesses. It also would increase its leverage in negotiating drug prices with insurers and other payers, an ever-important piece of leverage in key markets like the United States, where insurers, employers and other payers are pushing to hold down rising costs that have outpaced inflation for years.

Generic drugs are less expensive than name-brand drugs, but the prices of some generics have soared due to a lack of competition or shortages brought on by manufacturing problems.

The second-largest U.S. health insurer, the Blue Cross-Blue Shield carrier Anthem Inc., is buying rival Cigna for $48 billion in a deal that would make it the nation's biggest insurer by enrollment. Aetna Inc., the nation's third-largest insurer, also plans a $35 billion bid for Humana Inc.

Teva is Israel's largest drug company and has long been a source of pride for Israelis. The company dates back to 1901, when its founders launched a small importer of medications. According to the company's website, it began producing drugs in the 1930s.

Its late CEO, Eli Hurwitz, ran the company from 1976 to 2002 and received Israel's highest award for lifetime achievement. Teva's aggressive expansion included acquisitions around the globe and patent challenges.

Its takeover of Ivax Corp. in 2005 and Barr Pharmaceuticals in 2008 for about $7.4 billion each were the biggest by an Israeli company at the time and cemented Teva's position as the world's largest producer of generic drugs.

The company also branched out into developing branded drugs, including Copaxone, developed in Israel for the treatment of multiple sclerosis. It also has a patent on Azilect, a treatment for Parkinson's disease.

"This becomes something strategic. In Israel ... since it's a very small community, everybody inspires everybody else," Vardi said.