An EPA internal investigation determined federal and state regulators mistakenly concluded water pressure inside the mine near Silverton was not high enough to cause an accident. 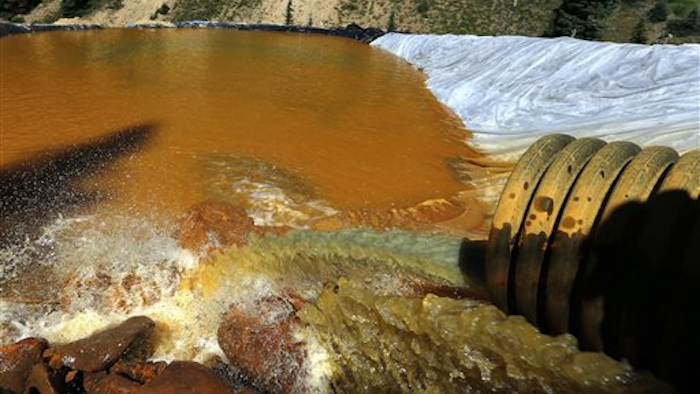 BILLINGS, Mont. (AP) — Republicans say they're not satisfied with a U.S. Environmental Protection Agency claim that a 3-million-gallon toxic spill from an inactive gold mine was likely "inevitable," even though there had been prior warnings that such a spill could occur.

An EPA internal investigation determined federal and state regulators mistakenly concluded water pressure inside the mine near Silverton was not high enough to cause an accident.

That turned out to be wrong. The pressure blew on August 5 when a government cleanup team started excavation and cleanup work on the site. The accident sent a torrent of poisoned mine water into rivers in Colorado, New Mexico, Utah and on the Navajo Nation.

A report summarizing the investigation appeared to minimize the agency's responsibility, with the suggestion that a blowout likely could not have been avoided.

The Associated Press reported Saturday that EPA managers knew that a release of "large volumes of contaminated mine waters" was a possibility as early as June, 2014. The concerns about a large spill were repeated in a May work plan from an agency contractor, Environmental Restoration.

Yet officials drew up only a cursory spill response plan and appeared to take few extra precautions when working at the mine site this summer.

"This new report cannot excuse their liability in causing the spill and the negative impact it is having downstream," U.S. Senate John Barrasso said in response to EPA investigation. "The EPA will have to explain to the American people how this happened."

Barrasso, a Wyoming Republican who chairs the Senate Indian Affairs Committee, has scheduled a September 16 hearing on the Gold King Mine spill. It's one of a series of hearings on the accident planned by Republicans once Congress returns from its August recess.

In the report released Wednesday, EPA officials also faulted procedures that left personnel largely unprepared for the spill and recommended changes to avoid a repeat of the accident.

Other investigations are pending from the EPA's Inspector General and the U.S. Interior Department. But Colorado Attorney General Cynthia Coffman said an outside review "is a must."

"I don't trust the EPA of this administration to investigate itself," said Coffman, a Republican. "It would never have allowed BP to investigate the Deepwater Horizon oil spill."

A spokeswoman for Colorado Gov. John Hickenlooper said the Democrat would be briefed on the EPAinvestigation after it was reviewed by Natural Resources staff. Spokeswoman Kathy Green declined further comment.

The toxic sludge released from the mine prompted the shutdown of some public drinking water and irrigation systems and tainted hundreds of miles of rivers.

EPA Deputy Administrator Stan Meiburg said on a Wednesday conference call that underestimating the water pressure inside the mine workings "was likely the most significant factor relating to the blowout."

The internal investigation revealed that regulators could have drilled into the mine to get a better gauge on how much pressure had built up. That didn't happen.

"This procedure may have been able to discover the pressurized conditions that turned out to cause the blowout," the investigation report said.

However, Meinburg said there was "no evidence to suggest this technique would be necessary," and other factors indicated there was little or no pressure inside the mine.