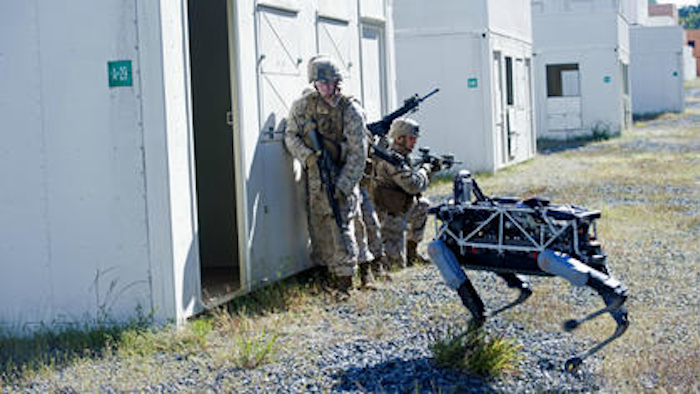 Spot, a 160-pound quadruped robot designed by Boston Dynamics, recently spent a week in combat testing at the Marine base in Quantico, Virginia.

Spot is also smaller, quieter and more agile than previous quadruped robots; a video demonstration showed a prototype staying upright despite efforts by Boston employees to topple it.

“The Marines have been very receptive to the new technology, embrace it and come up with new ideas we couldn’t even dream up,” said Capt. James Pineiro, the branch head for the Marine Corps Warfighting Lab.

Boston officials said the technology could be particularly useful for carrying cargo and for scouting missions. The Quantico exercises sent Spot across hills, woodlands and urban settings — including successfully entering buildings and looking for possible threats.

“Robots can’t get shot and they can’t die,” said Boston Dynamics roboticist Ben Swilling. “If you need to send someone into danger’s way, you don’t want anyone to get hurt.”