When the Concorde started flying in the 1970s, hopes were high that the traveling masses would soon streak through the air faster than the speed of sound or soar in planes that hurtled like missiles above the earth's atmosphere. Instead, jetliners still look the same as they did five decades ago and travel times have barely budged. 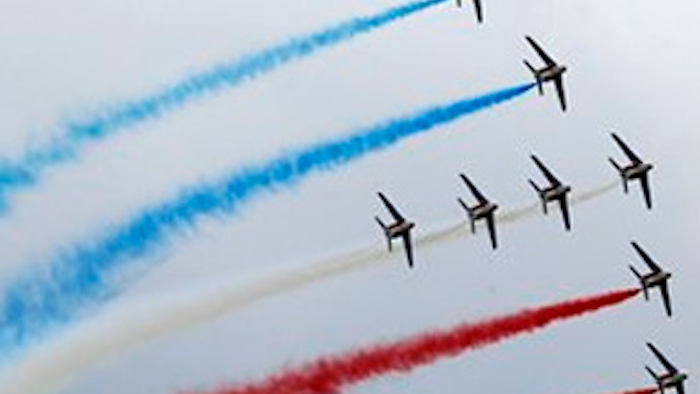 LE BOURGET, France (AP) — When the Concorde started flying in the 1970s, hopes were high that the traveling masses would soon streak through the air faster than the speed of sound or soar in planes that hurtled like missiles above the earth's atmosphere. Instead, jetliners still look the same as they did five decades ago and travel times have barely budged.

To consumers who have watched the world's technological imagination shift to Silicon Valley, the airline industry seems plodding. Computers and cellphones are obsolete almost as soon as they're unwrapped. The aviation industry looks stuck in time by comparison.

"Twenty years ago, 10 years ago even, a lot of technology and innovation came from the aerospace industry," said Larbi Ouchelouche, who is the project manager at Speel Praha, a Czech company that makes black boxes and other flight monitoring systems. "But today, the commercial is going so fast."

Restricted by huge costs, rising fuel prices and safety concerns, the aviation industry is unable to make the same leaps and bounds. It has instead turned its eye to less obvious advances, ones that companies say have allowed more people to fly than ever before.

But even some industry insiders revealed a touch of disappointment at the Paris Air Show this week.

"Look at all the aircraft ... they're exactly the same (as they used to be), they're just using different material," said Gerrard McCluskey, the vice president of engineering at AERO Vodochody, a Czech aerospace manufacturer.

One of the most talked about innovations at the show in Le Bourget this week was the use of composite materials — including carbon fibers and plastics; Airbus' newest jet, the A350, relies heavily on composites. But to the naked eye, it looks just like all the other Airbuses on display.

Many plane manufacturers let the military lead the way because the armed forces have the money to play with new technologies, test them extensively and then figure out how to build them efficiently.

"We let the military test it, prove it," McCluskey said. "I think what we have to understand is that aircraft are vehicles, they have to be safe and have to follow certifications."

But he predicted that within the next 10 years, planes won't contain a fuselage — where the cabin and cockpit are now. They'll just be one flying wing. Like a fighter jet. Or the gone, but-not-forgotten Concorde, which cut the flight time from London to New York to 3 hours and 20 minutes from nearly eight hours.

The Concorde was heavily subsidized by the French and British governments and as the industry declined in the late 1990s and early 2000s, it became clear it was no longer viable.

While the experience of air travel has changed little, its global popularity has grown almost exponentially in the past two decades. In its 20-year outlook, Boeing Co. predicted the commercial aircraft fleet would double by 2034, with most of the new passengers in Asia and Latin America, where standards of living are rising quickly. But increased demand and the rising price of fuel have forced manufacturers to focus all their innovation know-how on fuel economy.

In the last 10 years, "the price of a barrel of oil has gone up, say from 25 bucks to over 100," said Jim Stoker, president of GE Aviation Czech. "If you go look at your airline ticket, well, it's higher than it was 10 years ago, it's still not four (times) higher."

That leads to the composites and lightweight metals that were the stars of the Paris Air Show. Both shave weight off planes, making them more efficient to fly. Composites also endure damage better, extending an aircraft's life.

"Fifteen years ago nobody could afford to fly constantly. Today people can fly," said Ingrid Joerg, a senior vice president for Cleveland-based Aleris, which rolls out aluminum skins for major aircraft manufacturers. "The global mobility that has happened to a large extent has been because prices have dropped for passengers."

The company recently opened a plant in China to serve the growing Asian market and is constantly adjusting its alloys for lighter weight, but few passengers — or even pilots — are going to pick up on the subtleties between one aluminum hull and another.

A few more might notice the potential in a new way for airplanes to taxi to and from their gate, developed by engineering conglomerate Honeywell and aerospace and defense company Safran. Currently, jet engines are used — making taxiing noisy and fuel-guzzling, and preventing airplanes from backing up. That's why they are often towed.

The Electric Green Taxiing System instead uses the plane's auxiliary engine, which provides a plane with electricity while the main engines are off, to power the wheels. Taxiing is quieter and more fuel efficient and makes the plane much more maneuverable. For passengers, it means no more waiting for a tow.

Some of the technologies developed to put fighter jets at the vanguard are now coming to private jets and may eventually make their way onto commercial flights.

Flying in a Gulfstream is about as far from the commercial travel experience as possible. Windows are bigger. Beds, couch and wireless network come standard, as does the ability to use a single mobile app to control the lights, shades, temperature and televisions. The latest model from the Savannah, Ga., company flies at Mach .9 — just shy of the speed of sound — and is the fastest civilian plane approved for travel, according to Steve Cass, the company's vice president for communications.

The new plane shaved about an hour off the trans-Atlantic flight to Paris from the company's headquarters compared to a commercial jetliner.

"Their business model is a lot different," Cass said of commercial travel. The commercial airline "business is to transport people from Point A to Point B at the lowest cost."

Private aircraft like the Gulfstream cabin have been taking altitude artificially lower for around 15 years — cutting back on fatigue, lessening the effects of jet lag. The most recent Boeing and Airbus models have adopted the technology — a subtle change but one that travelers crossing an ocean might notice after a few hours in the air.

"You don't get the puffy hands, the puffy feet," Cass said.

Other tangible changes may eventually come from composite materials, said McCluskey of the Czech manufacturer, even though most planes are made of aluminum and will continue to be for years to come.

Composites allow for longer panels — rather than the small ones, riveted together that are seen are many aluminum planes — and that means fewer pieces that need to be connected. Planes made from composites should also be able to stay in service longer because the new materials withstand damage better. Fewer pieces and longer in-service times mean cheaper construction — and that will allow manufacturers to play more.

"In the world we live in today, constrained by all the economics that we have, the money is just not there anymore," said McCluskey. "So it's step by step, and the steps are slower unfortunately."

There hasn't been what innovators call a "disruptive technology" since the Concorde, and the idea of supersonic mass travel has faded away with the end of that program in 2003. The only future possibilities would be for commercial flight to go either electric or ballistic — literally exit the Earth's atmosphere like a missile and come down somewhere else on the globe, said Gerard Feldzer, an aerospace analyst who once led the French air and space museum at Le Bourget.

It's a long way off, he acknowledged.