Federal prosecutors have accused a Kansas firearms dealer of paying more than $1 million in bribes and kickbacks to two high-ranking executives of Georgia-based Glock Inc. in exchange for preferential treatment and access to confidential company information. 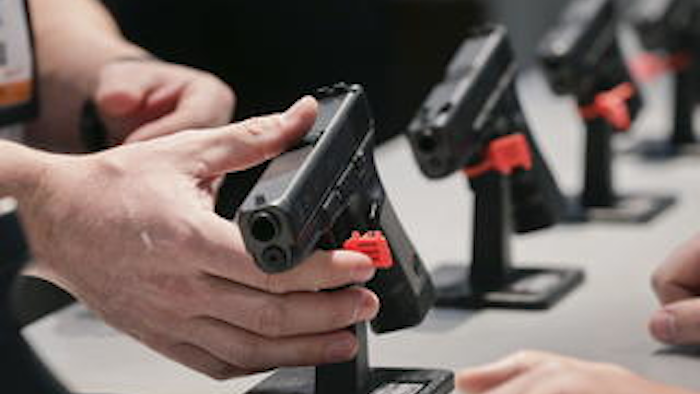 TOPEKA, Kan. (AP) -- Federal prosecutors have accused a Kansas firearms dealer of paying more than $1 million in bribes and kickbacks to two high-ranking executives of Georgia-based Glock Inc. in exchange for preferential treatment and access to confidential company information.

All five are facing one count of conspiracy, 11 counts of wire fraud and 10 counts of money laundering, The Kansas City Star (http://bit.ly/1menSb1 ) reported.

According to the indictment, Ralph was doing business as OMB Guns when he paid more than $1 million in bribes and kickbacks to James Dutton and Welcome Wood, funneling the money through businesses and bank accounts created by Lisa Dutton and Paula Wood.

Prosecutors said Ralph sent roughly 140 payments through the U.S. Postal Service from 2003 to 2009, and 80 by wire transfer from 2009 to 2011. In exchange for the payments, the two company officials steered potential customers to OMB Guns and gave him priority access to limited products, the indictment said.

With the help of computer software provided by the two officials, Ralph was able to convert firearms sold to him at a discount for sale to law enforcement officers and instead sell them at a premium to the commercial market, prosecutors said.

After Glock discovered that alleged scheme, it filed a civil lawsuit in federal court in Georgia against Ralph and his company in 2012. Ralph filed a counterclaim against Glock. The case is pending.

Ralph's attorney, Brian Bieber, said Wednesday they had been in contact with federal prosecutors and weren't surprised by the charges.

"We anticipate bringing this matter to a conclusion in the very near future," Bieber said.