President Donald Trump reportedly told manufacturing executives on Monday that his administration believes "we can cut regulations by 75 percent, maybe more" during a meeting at the White House. 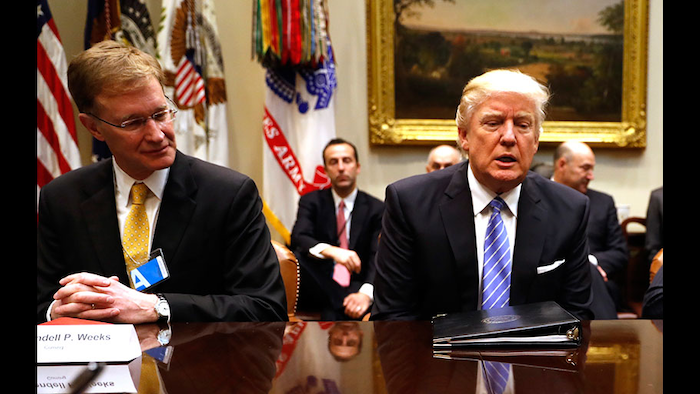 President Donald Trump reportedly told manufacturing executives on Monday that his administration believes "we can cut regulations by 75 percent, maybe more" during a meeting at the White House.

Trump said that business leaders view regulations as more of an issue than the nation's tax code, but advocates worried that a sweeping overhaul of federal regulations could jeopardize worker and consumer protections, consumer safety and the environment.

The president said that dramatically cutting regulations would somehow yield a system "just as strong and just as good and just as protective of the people" and declared that he was "a very big person when it comes to the environment."

He also reiterated his goal of reducing the corporate tax rate from 35 percent to as little as 15 percent. Although Trump did not offer specifics about the proposals, his administration believes that subsequent economic growth would prevent the nation's debt from ballooning in the wake of lost tax revenue.

Analysts, however, warned that absent revisions to Social Security and Medicare, the tax proposal could add trillions in debt in coming years.

Trump also insisted that his administration would impose "a very major border tax" on companies that shift jobs overseas and send products back to the U.S. He previously called for a 35 percent fee, but a tax would need to clear the Republican-controlled Congress while a tariff would likely meet a legal challenge and could spark trade wars.