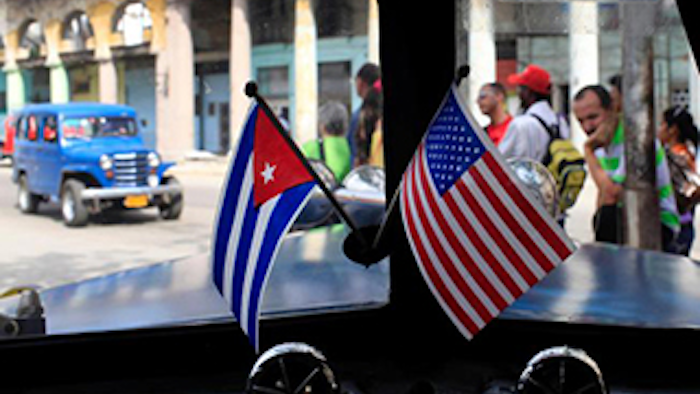 Inside both governments, advocates of a closer relationship are struggling against obstacles that include the U.S. trade embargo on Cuba, resistance among Cuban-Americans in Congress and a Cuban reluctance to open to the U.S. before Washington does away with more of the embargo.

Both sides have been pushing to create momentum as the first anniversary of the declaration of detente nears, and with Obama hoping to make a victorious trip to the island by the middle of next year.

The Obama administration has said it is considering a new set of regulations further loosening the embargo, which is imposed by U.S. law. Cuban officials told reporters this week they expected deals on regularly scheduled flights, anti-drug cooperation and environmental protection by around the end of the year.

Vilsack on Wednesday became the third U.S. Cabinet secretary to visit Cuba this year, holding a series of meetings with Cuban officials on topics like fruit and vegetable export certification and field inspections aimed at laying the groundwork for future agricultural trade between the U.S. and Cuba.

"This happens with every country we deal with," Vilsack told reporters at the U.S. Embassy on Friday afternoon. "We're encouraging that process to begin now because it does take time. Our interest in this is a reflection of our interest in ensuring, as the president desires, that the embargo gets lifted and we actually have two-way trade."

Cuba's agricultural productivity has plummeted since its 1959 revolution and ordinary Cubans' strongest complaints are about the high prices and low quality of basic foods. The Cuban government almost entirely blames the U.S. embargo, but outside experts point to the inefficiency of the centrally controlled economy, which has a monopoly on many staple foods.

U.S. food sales to Cuba have been allowed for more than a decade, but the island's purchases have plummeted in recent years. Cuba says a bar on credit from U.S. producers has made it easier to buy from countries such as Brazil and Spain.

"They're trying to do as much as they can to get the United States to normalize relations," said Paul Johnson, co-chairman of the U.S. Agriculture Coalition for Cuba. "It's going to be a tough haul until at least the credit issue is resolved."

Vilsack was hosted by Cuban Agriculture Minister Gustavo Rodríguez Rollero, who declined to speak with the press.

But Horacio Baez Gonzalez, a member of the board of directors of the Antero Regalado Agricultural Cooperative, expressed confidence the new Cuban relationship with the U.S. will make life on the farm easier.

"We believe that this represents something that will bring us improvement," he said as Vilsack examined the farm's freshly painted but antiquated tractors. "In every sense: production, better equipment, new tractors."

While it appears unlikely the U.S. Congress will act on the embargo before Obama leaves office, Democratic Rep. Kurt Schrader of Oregon, the great-grandson of Cuban emigrants to the U.S., predicted the embargo would not last long.

"I don't know if it will be lifted in the next year or five years from now," he said as he walked through a field of malanga, a ubiquitous root vegetable. "This is where it starts, building the relationships."