How Drones Are Flying Their Way Into the Food Industry

Drone technology is already being used in various countries worldwide. With the possibility of drones showing farmers exactly where to spray, fewer chemicals could be used. This could easily translate to lower costs for consumers and less of an impact on the environment. 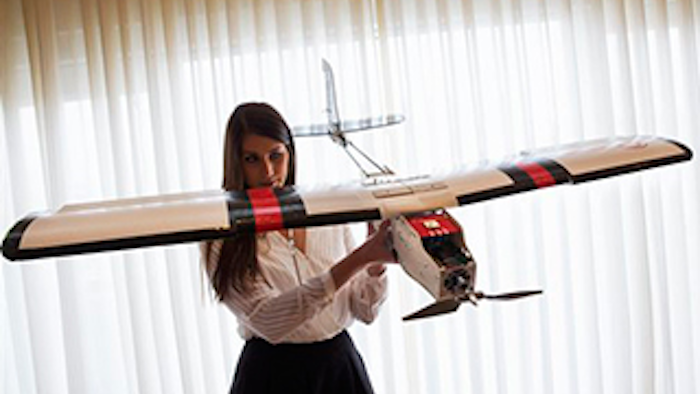 Earlier this month, the Federal Aviation Administration issued the first-ever permit for agricultural use of unmanned aerial vehicles, or drones.

The Associated Press reports that Steven Edgar, president and CEO of ADAVSO, says his Idaho-based business will use a lightweight, fixed-wing drone to survey the crops.

When the Northern Plains Unmanned Aircraft Systems Test Site became operational last spring, drones began being tested on their ability to check the soil quality and the status of the crops. It was discovered that that drones could be a big help to farmers by using images taken from above with infrared photography and other technology to show the heat or water content of the plants.

Drone technology is already being used in various countries around the world. With the possibility of drones showing farmers exactly where to spray, fewer chemicals could be used. This could easily translate to lower costs for consumers and less of an impact on the environment.

In June of last year, the AP said at least 75 percent of the drone use in civilian airspace is expected to involve agriculture someday. Just six months later, the Association for Unmanned Vehicle Systems International, a trade group, now says agriculture could account for 80 percent of all commercial drone use — once regulations allow it, of course.

While it could be awhile before it reaches approval, the FAA is continuing to work on rules that would balance the desire for commercial flights of small drones with the need to provent collisions.

Here are five ways that drones could affect the U.S. food supply:

The AP says the first agricultural drones are looking at massive fields of crops to help scout out the areas where plants are too wet, too dry, too diseased or too infested with pests.

Potentially, the drones could help farmers count the number of plants and their heights. While farmers are now able to use satellite technologies, it doesn't provide as detailed of images as low-flying drones could.

Edgar told the AP, "This is about getting the most productivity from every square inch of a farm."

Roger Johnson, prseident of the National Farmers Union, says his father used to fly a plane over his ranch to spot escaped cattle when he was growing up in North Dakota. That's easily something a drone could do — and with far less money and effort.

Drones would be able to help ranchers count their cattle, disturb pests that might be bothering livestock and even apply insecticides to animals.

A new project researched by the University of Maryland is looking into developing the drone technology to include monitoring fish.

Matt Scassero, the project director, says a laser-based sensor mounted on a drone would allow scientists to essentially "see through the water" while also measuring the size of schools of fish.

And how cool is this — some drones are even made to land on water, making it possible to measure the quality of the water.

Farmers could also benefit by using the date of the surveyed land to narrow down the areas that need treatment. If a plot, for example, is infested with weeds, a farmer could spray herbicide just in that area, instead of spraying an entire field.

Such precision would allow farmers to drastically cut down on the cost and application of chemicals.

Secrets, Secrets Are No Fun!

Another major way farmers could benefit from unmanned vehicles is by using them to film close-ups of operations — something satelites and airplanes can't easily obtain.

Mark Devries, a documentary filmmaker, says he has used drones to fly over large commercial hog operations and film them. He says he wants consumers to see the buildings full of animals and huge manure pits.

But R.J. Karney of the American Farm Bureau Federation says that filming such operations could pose a "major concern."

Karney's group is working with Congress to address the privacy concerns. He says the violation can put farmers at a competitive disadvantage.

While there are mixed feelings on the up-close filming of operations, the agricultural industry still sees big advantages in the overall usage of drones for food suppliers.

Karney says "farmers are anxious to see where this can go."