Latest in Food-Track Tech: Swipe a Code, Meet Your Fisherman

After eyeing a piece of haddock on the supermarket counter, a customer scans a code and finds out the fish was caught in the waters of Georges Bank and learns the name of the fishing boat — and maybe even sees a picture of the smiling, rain-slickened fisherman who reeled it in. Welcome to the future of buying New England seafood. 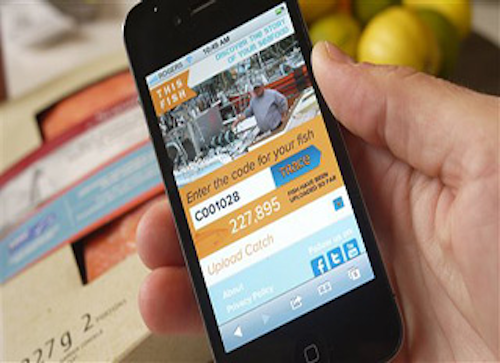 PORTLAND, Maine (AP) — After eyeing a piece of haddock on the supermarket counter, a customer scans a code and finds out the fish was caught in the waters of Georges Bank and learns the name of the fishing boat — and maybe even sees a picture of the smiling, rain-slickened fisherman who reeled it in. Welcome to the future of buying New England seafood.

A group of scientists and fishermen said the technology isn't about a gimmick so much as survival. They're working on a new tool they say will allow consumers to learn the backstory of a piece of fish while standing in the supermarket aisle with their smartphone.

In an era when many sectors of the New England fishing industry are struggling with depleted resources and choking catch quotas, increasing the cachet of local seafood could be the last, best hope, said Ben Martens, executive director of the Maine Coast Fishermen's Association, one of the groups involved in the "Boat to Plate" project.

"Most fishermen don't want to be involved in this kind of stuff. They want to go out into the water," said Martens, whose group represents 35 mostly small-boat fishermen. "We just don't think that's the way of the future."

Gulf of Maine Research Institute in Portland is developing the tool, which was recently awarded a $175,000 federal government grant, in cooperation with Maine Coast. Final release is about two years away and will likely take the form of a smartphone app, said Jen Levin, the institute's sustainable seafood program manager.

The project involves bringing together data about the different pieces of the supply chain — including catch, landing, auction, processing and delivery — and allows the buyer to see all the way back to the fisherman, Levin said.

The plan is the latest in the fast-growing food traceability tech sector, which seeks to connect retailers, restaurants and customers with the origin and journey of their food. The world market for food traceability technologies will reach $11.15 billion in 2015, an increase of more than a half-billion dollars from the previous year, according to market research firm Visiongain.

Consumers have had access to technology that connects them with the histories of such items as flour, berries, Alaskan salmon and antibiotic-free beef since the late 2000s, industry professionals said. The QR codes — the black and white digital squares readable with a camera — appear in both farmers markets and high-end restaurants.

The Gulf of Maine seafood tool represents a new horizon in food traceability in that it will use data from multiple sources to bring traceable seafood from a large, diverse fishery to supermarket consumers, Levin said. Hannaford Supermarkets, which has more than 150 locations in New England and New York, is on board.

Despite the growth of food tracking technology, it's not well-known to many consumers, and the industry is trying to change that, said Phil Werdal, CEO of Trace Register, a Washington-based digital traceability company and one of the industry's key players.

"I think it's in the very early stages of development, the consumer piece," Werdal said. "It's evolving and improving, but it's not that common right now."

Gulf of Maine Research Institute is working with Trace Register and Vancouver-based This Fish to make the tool possible. The institute will likely initially apply it to seafood labeled through its sustainable seafood verification program, Levin said. That program includes popular New England staples such as cod and lobster that are pulled from the waters in and around the Gulf of Maine, a critical fishing ground that touches three states and two Canadian provinces.

"Locally, this will provide fishermen a way to differentiate their products and create a more even playing field in a global seafood market place," Levin said.

To grow the project, Boat to Plate's architects will need buy-in from New England's notoriously provincial commercial fishermen. Terry Alexander, a Harpswell, Maine, fisherman who sits on a key New England regulatory council, said he is reluctant to describe the program as "new technology." Savvy consumers have long had the ability to trace their fish back to the source if they know their fishermen and distributors, he said.

But there is precedent for similar projects succeeding. Jared Auerbach, owner of Boston seafood distributor Red's Best, said he has provided wholesalers with backstories about his fish since about 2008.