Food Year in Review: 2014 — A Year of Battle Lines Drawn Over Dinner

If there was any theme to the food world in 2014, it was the prevalence of polarizing issues. Whether we were tussling over genetically modified organisms, or debating how healthy is too healthy for school lunches, or scolding one another for our gluten choices, this year our collective culinary consciousness seemed mired in disputes. 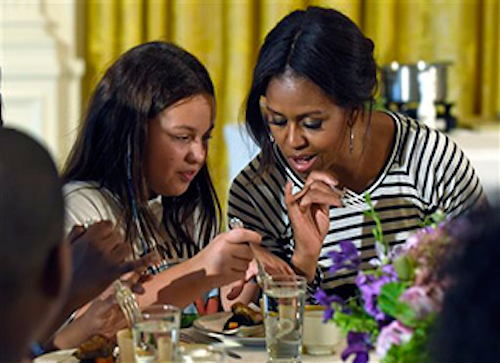 Have you picked a side yet? If not, you'd better think fast, because the battle lines are being drawn and they cut right down the dinner table.

For if there was any theme to the food world in 2014, it was the prevalence of polarizing issues. Whether we were tussling over genetically modified organisms, or debating how healthy is too healthy for school lunches, or scolding one another for our gluten choices, this year our collective culinary consciousness seemed mired in disputes.

So here's a roundup of some of the more contentious items on this year's menu of food news:

TO GLUTEN OR NOT TO GLUTEN

Oh, that pesky grain protein. For several years now gluten has been the "new fat," that demonized ingredient-of-the-moment that countless Americans obsess over. And like so many dietary fads before it, the anti-gluten movement has heralded a tidal wave of products and promises.

But this is no ordinary Snackwell's situation. Gluten — which can pop up unexpectedly across the food chain — really can make people diagnosed with celiac and other digestive disorders exceedingly ill. Except that those folks alone — by some measures about 3 million — can't account for the growth of the gluten-free market into a multi-billion-dollar industry.

And there's our dispute. Experts increasingly — and with greater volume — question the value of going gluten-free without a diagnosis, yet plenty of people staunchly stand by anecdotal health benefits. And so we have a glut of gluten-free products, from doughnuts to dog food. Now even Fido can pick a side.

At least we can now agree on what gluten-free means. As of August, the term is regulated, meaning manufacturers no longer can slap it willy-nilly on packages.

Like it or not, genetically modified foods are on the menu. So this year, the debate centered on how much we should know about that.

Advocates of GMOs — mostly business interests behind the industry — say the foods not only are safe but are key to managing the world's increasingly complex agricultural needs. Critics say we don't yet know enough about the foods to make that leap. But seeming to accept that the foods are here to stay, lately they have focused their efforts on legislation that would require labeling for foods containing GMO ingredients.

That set the stage for big-spending battles to win over voters. In May, Vermont became the first state to require the labels, but that's on hold pending legal challenges. Ballot measures that would have required labeling in California and Washington already had been defeated, and a similar measure in Oregon failed this year.

Chefs like Tom Colicchio and Jose Andres lobbied on behalf of labeling, while some companies tried to get out in front of the issue. In January, General Mills announced that its Original Cheerios would no longer contain GMO ingredients, but that's a rarity. And rather than allow the food industry to face a patchwork of state laws, next year Congress is likely to take up the issue.

It's Michelle Obama vs. Congress in a weighty battle.

To help address childhood obesity, the first lady made it her mission to help push through tougher nutrition standards for food served in schools. The changes — including prioritizing produce and whole grains — have been phased in since 2012. But it's been a struggle.

Some schools asked to opt out, saying the healthier foods were too costly, too difficult to prepare and unpopular with kids. The first lady this summer said she'd fight "to the bitter end" to keep standards high. The opt-out request didn't fly, but this month Congress did greenlight easing off the requirements on whole grains, as well as delaying tougher standards on sodium.

And the waistline war will wage on. Child nutrition and school lunches will come before Congress again next year, and the standards are almost certain to be reconsidered.

Fast-food workers continued their push to get consumers thinking about the other side of the Dollar Menu equation. The "Fight for $15" campaign that seeks higher wages for fast-food industry workers organized protests and job actions around the country, sometimes resulting in arrests. Many fast-food workers make barely more than the federal minimum wage of $7.25 an hour. That's about $15,000 a year for a 40-hour week.

And then there was the Market Basket battle. In a family/corporate feud more complex than a Tolstoy novel, the board of the New England grocery chain ousted its popular CEO, Arthur T. Demoulas. But workers — who praised him for generous pay and benefits — stood by their man and orchestrated weeks of job actions that hobbled the company. And customers — who love the company's low prices — stood by the workers by shopping elsewhere until Demoulas was reinstated and bought out opposing family members.

Fear not, there will be food fights aplenty to keep 2015 interesting. In addition to a continuation of this year's battles, we'll also see heightened tensions over restaurant reviews. Online sites like Yelp have taken heat for playing host to what some chefs feel is a business-bashing free-for-all. And in Texas, a cluster of restaurants has declared war on a newspaper food critic. Both spats could change the way reviews are handled.

And next year could see plenty of name-calling. Or rather, name-changing. The European Union and the United States are at odds over efforts to restrict the use of food names such as Parmesan and brie to products made in the European regions for which they are named. U.S. lawmakers say it's all a bunch of baloney. Or should that be Bologna?