John Sulton and his partner, Rob Walenta, operate Scissortail Farms on a 7.5-acre site west of Tulsa. In recent weeks they started growing 50 varieties of lettuce including kale, chard, mustard greens and arugula in their 26,800-square-foot, state-of-the-art greenhouse. 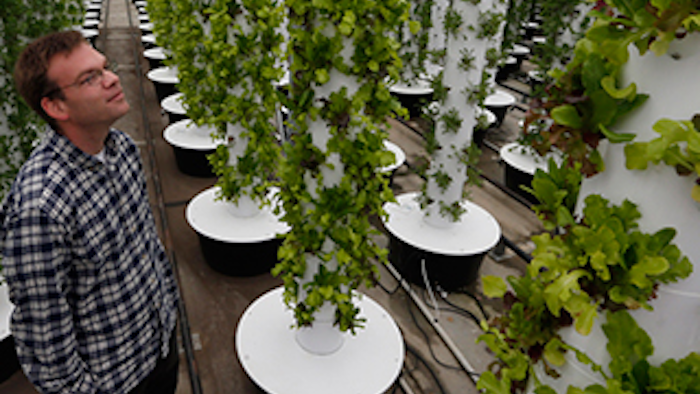 TULSA, Okla. (AP) — A pair of Tulsa businessmen are using futuristic farming techniques to grow leafy green vegetables by the thousands in a fraction of the space of a traditional farm.

John Sulton and his partner, Rob Walenta, operate Scissortail Farms on a 7.5-acre site west of Tulsa. In recent weeks they started growing 50 varieties of lettuce including kale, chard, mustard greens and arugula in their 26,800-square-foot, state-of-the-art greenhouse.

"It is nice to have everything indoors," Sulton told The Journal Record.

Sulton and Walenta's focus is building a loyal following by providing produce for the local community throughout the calendar year.

"Local is great, but if you disappear for a few months then you are not being consistent," Sulton said. "We want to be there for everybody throughout the year and not disappear."

"We buy from Scissortail Farms because their plants are grown locally; the quality is there," said Todd Phillips, general manager of Juniper.

Sulton and Walenta employ aeroponic farming to grow the vegetables. In aeroponics, farmers grow plants without soil and with little water. They use pumps and gravity to feed the roots with water loaded with nutrients.

The method is more expensive than traditional farming, but customers prefer the produce, Sulton said.

Phillips said Scissortail's prices are higher than buying vegetables from a traditional farm.

"A lot higher," Phillips said. "However, the product has a much longer shelf life. It has the freshness, flavor and the vitamins."

The growing method allows Scissortail Farms to consistently provide fresh produce within 24 hours of harvest, rather than waiting several days for shipment from outside the community, Sulton said. The process also eliminates the need for fertilizer or manure.

"We have made an investment in the infrastructure to support annual growing to maintain high quality throughout the year, no matter what the external conditions," Sulton said.

Produce grown in the soil lasts a fraction of the time of the plants coming from Scissortail Farms, Phillips said.

"A plant coming out of the soil is stored in warehouse then trucked to us," he said. "This is a stronger, healthier product."

Tim Blank assisted Sulton and Walenta with their plan to create the only aeroponic farm in the Oklahoma. Blank is a Florida-based hydroponics expert who worked for Walt Disney World in Florida at Epcot Center's Living with the Land pavilion starting in the early 1990s. Blank's domain was the Living with the Land exhibit, which examined innovative growing technologies. A boat ride through the display ends with a peek at a world of plants growing without soil.

"The technique is literally about six decades old," Blank said.

While it was developed in the 1950s, it was refined over the next two decades.

"People are able to eat healthy with a fraction of the effort and the time," Blank said.

A special polymer used as the skin of the greenhouse diffuses sunlight. It allows enough light to stimulate plant growth without the intensity, Blank said.

Plants at Scissortail Farms are able to withstand the variety of climates that occur in northeast Oklahoma, Blank said.

"We avoid the extremes," Blank said. "It reduces heat load stress on the leaf surface."

The thousands of plants growing out of 11-foot-tall white aeroponic tubes are watered every five minutes with conditioned water, Sulton said.

Each tower has 44 slots for growing plants. A few towers are 13-feet tall.

"Altogether, we've got a little over 62,000 individual slots for plants at any given time," Sulton said.

Plants are propagated in one area of the greenhouse, then moved into the aeroponic tubes. Scissortail Farms takes water from the city, removes the chlorine, then adds nutrients, Sulton said.

Sulton and Walenta's idea took root in 2010. They launched their company two years ago and today the farm is distributing product to restaurants and grocery stores in a 150-mile radius of Tulsa, Sulton said.

"Ultimately, we want to serve as many restaurants and retail outlets as we can in the area," Sulton said.