More than half of Americans say they already have enough information at restaurants to decide whether they are making a healthy purchase. But they want even more. According to a poll conducted in December, most Americans favor labeling calories on menus in fast food and sit-down restaurants. 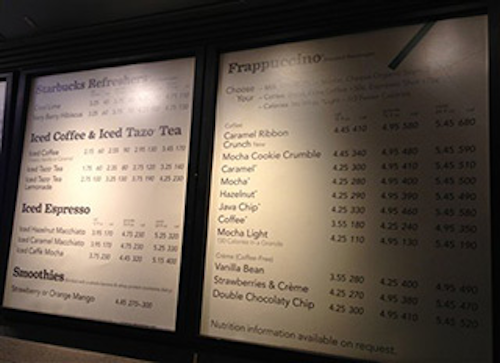 WASHINGTON (AP) — More than half of Americans say they already have enough information at restaurants to decide whether they are making a healthy purchase. But they want even more.

According to an Associated Press-GfK poll conducted in December, most Americans favor labeling calories on menus in fast food and sit-down restaurants. Most favor labels for prepared foods in the grocery store, too.

The poll was conducted a little more than a week after the Food and Drug Administration announced new rules that will require restaurants and other establishments that sell prepared foods and have 20 or more locations to post the calorie content of food "clearly and conspicuously" on their menus, menu boards and displays. Companies will have until November 2015 to comply.

Slightly fewer approved of requiring the calorie postings in other dining locations. Forty-nine percent of Americans supported posting calories on coffee shop menus and 44 percent approved of the postings on vending machines and at movie theaters. Forty-three percent favored calorie postings in amusement parks. All of those establishments will be required to post calorie amounts under the new FDA rules.

Only about 1 in 10 Americans oppose labeling requirements at each of these places. The remainder said they neither favor nor oppose each requirement.

The idea behind the rules is that people may pass on that bacon double cheeseburger if they know it has hundreds of calories — and, in turn, restaurants may make their foods healthier to keep calorie counts down. The menus and menu boards will tell diners that a 2,000-calorie diet is used as the basis for daily nutrition, noting that individual calorie needs may vary. Additional nutritional information beyond calories, including sodium, fats, sugar and other items, must be available upon request.

When they're judging whether a food item is a healthy choice or not, 55 percent of Americans say how many calories it contains is very or extremely important to them. Same with sodium levels.

Sugar and fat were slightly more important to health-conscious diners — 61 percent said sugar was very or extremely important when deciding on healthy purchases and 59 percent said the same about the amount of fat.

Only 36 percent of Americans said they feel the level of vitamins and minerals is extremely or very important when making healthy purchases, and even fewer — 23 percent, less than a quarter — said the same about whether an item is organic. Women and people living in urban areas were most likely to make organic food a priority.

Even though a majority favors more calorie labeling, most Americans say they already have enough information to decide whether they are making healthy purchases at restaurants.

Around a third say they don't have enough information to decide if they are making a healthy purchase in any of those places.

When it comes to the grocery store, 75 percent of people say they have enough information to make a healthy choice. Unlike restaurants, where nutritional information is often a mystery, nutrition facts panels have been required on packaged foods since the 1990s. The FDA included prepared foods at supermarkets in the menu labeling rules as grocery stores have increasingly sold restaurant-like offerings.

The menu labels were required by Congress as part of health overhaul in 2010. The FDA has said they are just one way to combat obesity, since Americans eat and drink about one-third of their calories away from home.

Michael Taylor, FDA's deputy commissioner of foods, said the agency knows there is strong interest from the public in the labeling.

"It's not a magic wand, but it will help people make better choices about their diets," he said.