Four animal activists who took pictures of a large southwestern Utah hog farm have pleaded not guilty to charges filed under a controversial law that criminalizes undercover investigations of slaughterhouses and factory farms. 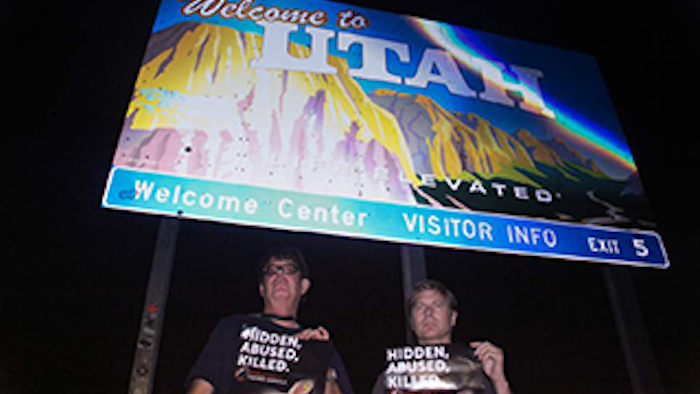 The four from California and Maryland entered the pleas Wednesday and Thursday to charges of trespass and agricultural operation interference.

A lawyer for the group says they were on a public road and took images of buildings, not animals or workers.

"Everyone has a legal right to use the road," said attorney T. Matthew Phillips. He said the four were retracing the journey of pigs from the farm to a California slaughterhouse.

"What they wanted to do is document the trail of tears, if you will," said Phillips, who added that the four were questioned for five hours on the side of the road after they were pulled over. Police dispute that claim.

Phillips said his clients weren't trying to provoke an arrest. They are Sarah Jane Gage, 43, of Los Angeles; Robert Penney, 64, of Laguna Beach, California; Harold Weiss, 34, of Pasadena, California; and Bryan Monell, 50, of Mount Rainier, Maryland, according to court records.

The second count against them comes under a law that makes it a crime to conduct undercover investigations of slaughterhouses and factory farms. It's being challenged by activists who say it's designed to prevent exposure of unsafe practices.

Six other states have similar measures, but the only person to be charged was also from Utah, said Matthew Liebman, a lawyer from the Animal Legal Defense Fund challenging the law.

Even though the 2013 charge was dropped because the images were taken from a public street, a federal judge cited the case when he decided to let the challenge against the law go forward in August.

Circle Four Farms is part of Murphy-Brown LLC, the livestock production subsidiary of the world's largest pork producer, Smithfield Foods Inc. The Utah farm raises and markets about 1.2 million hogs per year and employs about 450 people.

Members of the Bethesda, Maryland-based Farm Animal Rights Movement want to end the use of animals for food, according to the group's website, and promote a vegan lifestyle with advertisements and occasional dramatic protests.