US-Cuba Thaw Could Benefit Farmers, Among Others

U.S.-Cuba trade is poised to resume at last: President Barack Obama announced plans to re-establish diplomat relations with Havana, and economic ties are expected to follow. Among those eager for access to a Cuban market cut off by an economic embargo are U.S. farmers. 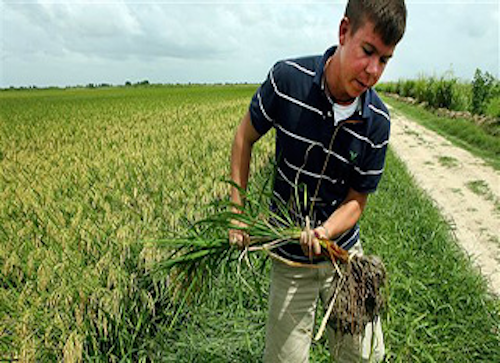 WASHINGTON (AP) — Freighters once carried Cuban nickel and limestone to the port of New Orleans and North Dakota beans to Havana. Cuban families ate bowls of American rice, while U.S. tourists flocked to casinos and nightclubs in Havana.

The United States' commercial ties with Cuba were broken 54 years ago after Fidel Castro took power on the Caribbean island. Now U.S.-Cuba trade is poised to resume at last: President Barack Obama on Wednesday announced plans to re-establish diplomat relations with Havana, and economic ties are expected to follow.

Among those eager for access to a Cuban market cut off by an economic embargo are U.S. farmers, travel companies, energy producers and importers of rum and cigars.

"We've been positioning ourselves for this day for many years," says Erik Herzfeld, co-portfolio manager of the Herzfeld Caribbean Basin fund, which has been investing in "the cruise lines, infrastructure (companies), any company that we think will eventually have a role in Cuba."

Gary Hufbauer and Barbara Kotschwar of the Peterson Institute for International Economics estimate that exports of U.S. goods to Cuba could reach $4.3 billion a year, compared to less than $360 million last year. And Cuban merchandise imports to the U.S. could go to $5.8 billion a year from nothing now.

Obama's announcement alone won't restart economic relations. Congress will have to act to lift economic sanctions against Cuba. But by loosening restrictions on travel and permitting travelers to use U.S. credit and debit cards in Cuba, among other things, Obama may have started a process that can't be reversed.

"It's like putting toothpaste back in the tube," says Kirby Jones, a consultant who has pushed for U.S.-Cuba trade ties. "People are going to get used to travel, used to doing business, used to sending remittances. You can't stop it."

Jones says U.S. industry will welcome access to Cuban supplies of nickel and limestone and to the Cuban consumer market.

Detroit automakers would seem to have an opportunity to replace the 1950s' American jalopies that now rattle down Cuban streets, but they weren't saying much Wednesday. "We're encouraged by the announcements today, and we'll evaluate the opportunities," said General Motors spokesman Pat Morrissey, who declined further comment.

Mortimer Singer, CEO of Marvin Traub Associates, a retail consultancy that helped bring Bloomingdale's to Dubai, says he will be encouraging his clients to pursue opportunities in Cuba. He noted that fast food franchises and mass stores will be the first to open in Cuba, a repeat of what happened in other emerging markets. But he believes that there will be an opportunity later on for department stores.

"It will start with the mass market and trickle up," he noted. He said that close geography and a link with Latin culture will be a plus. But he believes business will still face restrictions in the early years, and finding a business partner will be challenging.

Energy companies also have a deep interest in Cuba. The waters off the island's northern coast are believed to contain oil. But international oil companies have been reluctant to explore for oil because they feared angering the United States. The Spanish oil company Repsol drilled off shore in 2012 but did not find oil and gave up.

Sarah Ladislaw, director of the energy and national security program at the Center for Strategic and International Studies, said promising drilling locations remain. "There is lots more exploration people want to do," she said.

"It's the beginning," says Teo Babun, a Miami consultant.