Three months after a devastating form of bird flu made its first appearance in the Midwest, the first poultry farm in the region to be affected is growing turkeys again — even though the virus is still lurking in Minnesota and beyond. 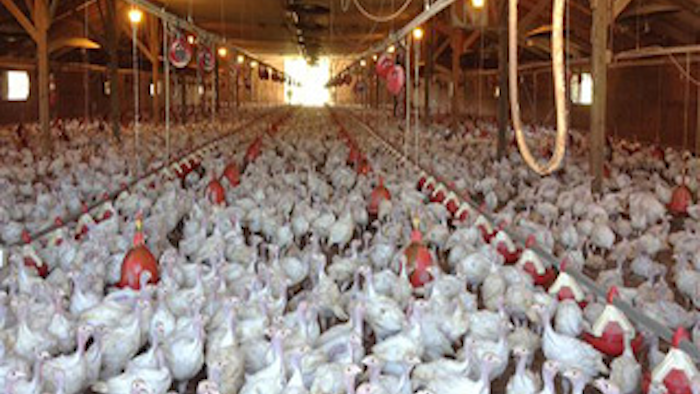 MINNEAPOLIS (AP) — Three months after a devastating form of bird flu made its first appearance in the Midwest, the first poultry farm in the region to be affected is growing turkeys again — even though the virus is still lurking in Minnesota and beyond.

The Pope County farm was restocked with new birds Sunday, Dr. Dale Lauer, an assistant director with the Minnesota Board of Animal Health, told The Associated Press.

It's the first affected farm in the country's top turkey producing state to reach the milestone of resuming production. A few other farms that were among the earliest to see the H5N2 virus will be restocked by next week, he said.

"We're hoping to get these premises repopulated and back up and running and on the road to recovery," Lauer said.

The farm's turkeys started dying in late February, and the U.S. Department of Agriculture on March 4 identified the culprit as the H5N2 virus, All 44,000 birds there died from the virus or were culled to prevent its spread.

Since then, more than 200 flocks have been affected, costing chicken and turkey producers nearly 47 million birds. Iowa, the top egg-producing state, was hit hardest with 73 cases totaling more than 29 million birds, mostly chickens. Minnesota's toll is approaching 9 million birds on 108 farms, mostly turkeys. While the pace has slowed, the virus hasn't gone away. Minnesota logged another case Friday. Iowa reported another Monday.

That said, at least one more Minnesota farm plans to repopulate this week and a few more will make the leap next week, Lauer said.

It's an encouraging sign, agreed Steve Olson, executive director of the Minnesota Turkey Growers Association and the Chicken and Egg Association of Minnesota.

"I think there's a sense of relief as I talk to guys, but there's also a sense of apprehension because there's still a risk, and there's also that unknown piece of whether they'll have another introduction of the virus," Olson said.

Olson said he hadn't spoken recently with the Pope County grower, whose identity hasn't been released, but one factor in that producer's decision is that it's a breeding operation and the industry needs the eggs it hatches. There aren't many other turkey farms in the immediate area so it faces less risk of the virus coming back from other farms, he added. The next few growers are also relatively isolated, he said.

"It will be a very busy time for all the producers, as well as the USDA, Board of Animal Health and Minnesota Department of Agriculture," Lauer said.

Getting clearance to restart is a lengthy process. After the barn is cleaned and disinfected, officials check for any remaining viruses. If a farm passes that test, it goes into at least three weeks of downtime. Then officials work with producers to decide when it's safe to restock.

Producers shouldn't have much trouble getting credit to restart, lenders in some hard-hit Minnesota counties said. Bankers can help growers tap government programs, university farm management experts are ready to help producers plan, and the state Legislature is expected to approve low-interest disaster loans and financing for biosecurity upgrades.

Olson said his group has already begun discussions with experts on what the turkey barn of the future should look like, perhaps retrofitting them with mechanical or tunnel ventilation and filtration systems to keep out viruses. But that's an expensive proposition and they don't know yet what the best approach will be, he said.

"Ultimately, one of the key criteria is, what does that barn need to look like to keep birds healthy?" Olson said.