Electronic tracking devices are being inserted into sturgeons to see if the construction of a new bridge in the New York City suburbs, right in the middle of its habitat, will effect them. The shortnose sturgeon and the Atlantic surgeon are endangered species. 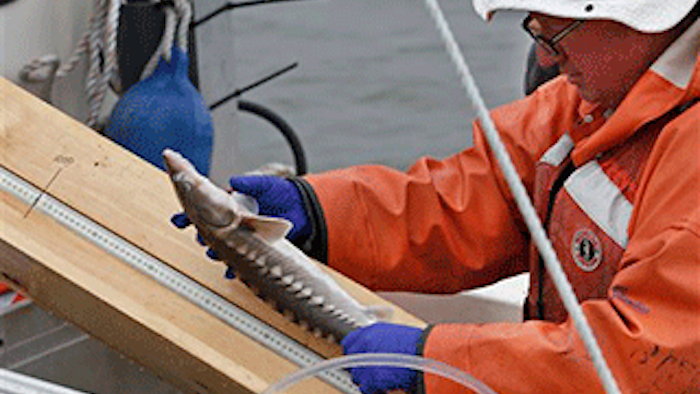 The biologist wore an orange slicker rather than hospital scrubs, and his operating room was a small fishing boat in the middle of the Hudson River. But Wednesday's operation was serious work as Burnett used a scalpel to make a 3-inch incision in the belly of a gasping shortnose sturgeon, inserted an electronic tracking device and quickly stitched up the wound.

After a few minutes in a holding tank to make sure the sturgeon was OK and a test with a monitor to make sure the new transmitter was working, the 25-inch, 3-pound patient was dropped back into the river.

If all goes well, its movements will be tracked for months by underwater receivers. And the fish will play its part in a study that stems from the construction of an immense new bridge in the New York City suburbs, right in the middle of its habitat.

"This will give us a much better understanding of where these fish are spending their time, when they're moving, where they're feeding, and whether they're affected by the construction," said Justin Krebs, a fish ecologist and a consultant on the study.

The shortnose sturgeon and its much larger cousin the Atlantic sturgeon — which can reach 14 feet in length — are on the federal endangered species list. A number of safety measures were conditions of the state Thruway Authority's permit to build a new Tappan Zee Bridge, which is expected to be under construction until 2018.

The measures include avoiding dredging during peak migration and spawning times and surrounding piles with curtains of bubbles from air compressors to dampen the sound underwater.

The Thruway Authority is nearly halfway to its goal of tagging 120 sturgeon with the transmitters, which can provide clues for long-term research and for immediate information about the effect of the bridge construction.

"They only spawn every 3 to 5 years, so if a female that's ready to spawn is injured or affected in some way or doesn't migrate because of the bridge construction, that could have a significant effect on the overall population," said Philip Musegaas of Riverkeeper, an environmental group that focuses on the Hudson.

The river has been home to both species for centuries; shortnose sturgeon spend their whole life in the Hudson, while Atlantic sturgeon are born there and return to spawn.

Hudson River sturgeon were so valued as food — one nickname was "Albany beef," referring to the state capital farther north along the Hudson — that they were overfished by the 20th century. Pollution and waterfront development also took a toll, and fishing was stopped in 1996, said Frances Dunwell, a coordinator with the state Department of Environmental Conservation.

The most recent official estimate of adult Atlantic sturgeon put the number at fewer than 900, although Dunwell said recent counts of juvenile fish indicate the number has swelled in recent years. Shortnose sturgeon are believed to number in the tens of thousands.

Both species were scarce on Wednesday, when Burnett and his partner John O'Herron pulled up about 20 nets and found just one sturgeon to tag.

The fish was gently placed into a tank spiked with an anesthetic, then measured, weighed and injected with a microchip that will identify it if it's ever caught again. Then Burnett, in purple gloves, performed the surgery, inserting the inch-and-a-half long beacon into a body cavity while O'Herron kept the fish hosed down with river water.

They worked in silence, mostly ignoring a tugboat packed with reporters that had pulled alongside to watch.

Krebs said the biologists had been trained by the National Marine Fisheries Service.

Hundreds of sturgeon previously have been tagged with electronic monitors for academic studies, and the Thruway project will use some of that data, although it hasn't reached agreement with a researcher who has tagged more than 300 Atlantic sturgeon.

Riverkeeper says the state should make sure it gets access to all the data.

"We support the idea of the monitoring plan, of course, but it's not fully effective unless you're detecting every tagged fish that goes through," Musegaas said.