This survey is the first to assess the educational needs of organic dairy farmers in the region. While this finding won’t come as news to dairy farmers, it may surprise organic milk consumers who pay considerably more for organic milk than conventional milk at the grocery store. 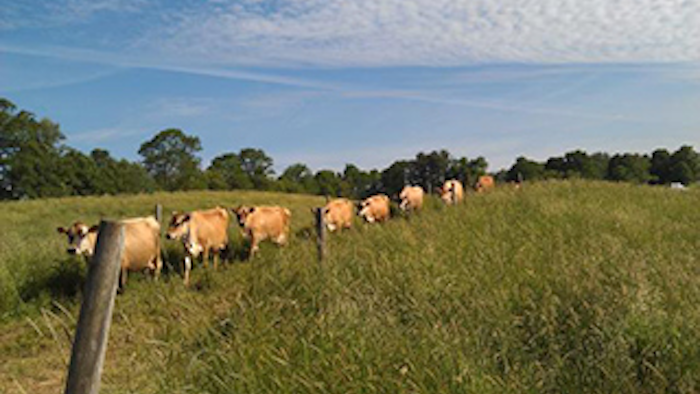 Northeastern organic dairy farms say their top concern is receiving steady, fair prices for their milk from milk processors, according to a new survey that is the first to assess the research and educational needs of organic dairy farmers in the region. The research is funded by the NH Agricultural Experiment Station at the University of New Hampshire College of Life Sciences and Agriculture.

While this finding won’t come as news to dairy farmers, it may surprise organic milk consumers who pay considerably more for organic milk than conventional milk at the grocery.

“When organic dairy farmers are talking about price, they are talking about the price that they get for their milk. That is a very different conversation than what the consumer is actually paying for the milk. The profit margin is still pretty small whether you are an organic or conventional dairy farmer. Consumers may not realize this because they may think that if they are paying more for organic milk, surely 75 percent of that is going directly back to the farmer. That is not the case,” said David Townson, professor of reproductive physiology.

The study was conducted by UNH researchers David Townson, professor of molecular, cellular and biomedical sciences; Lisa Townson, assistant director of UNH Cooperative Extension; André Brito, assistant professor of organic dairy management; and André Pereira, doctoral student in dairy nutrition. The results are published in the recent article “Assessing the research and education needs of the organic dairy industry in the northeastern United States” in the Journal of Dairy Science.

Working with the Northeast Organic Dairy Producers Alliance, UNH researchers surveyed 183 Northeastern organic dairy farms. They found that 85 percent of those who responded to the survey ranked a steady, fair milk price as their top challenge and highest priority. Integrated pest management (fly control) was identified as the top animal health priority.

Even though the market price for organic milk has been stable in recent years -- between $0.64 and $0.68 per kilogram of milk from 2006 to 2012 -- the costs of organic mixed grain feed for the cows have increased substantially, from $380 a ton in 2006 to $720 a ton in 2012, according to the USDA. UNH researchers believe this decline in profit margins for organic dairy farmers is most likely the reason why they perceive the price they receive for their milk as not fair.

Most Northeast dairy farms, organic and conventional, are considered small with fewer than 100 milking cows. In order to improve the economic viability of their operations, some farmers have shifted their conventional operations to organic milk production where gross milk premiums are higher.

“If you are only milking 40 for 50 cows and you’ve got that small margin, it’s really tough to make a living. This is why so many dairy farmers in the Northeast do other things like make their own syrup, honey, and cheese. They can market those products and sell directly to the public, cutting out the middle man,” Lisa Townson said.

The USDA estimates there are about 875 certified organic dairy farms in the Northeast. More than 80 percent of all U.S.-certified organic dairies are in the Northeast and Upper Midwest. Between 2000 and 2008, the number of certified organic dairy cows on United States farms increased from 38,000 to more than 249,000 cows, an annual average increase of 69 percent, according to the USDA. At the same time, the USDA estimates the total number of milk cows in the United States has declined from approximately 20 million cows in 1950 to less than 10 million cows today. Production per cow is commensurately greater as result of breeding, nutrition, and other advancements in dairy management.

The consumer market for organic milk grew from two percent to three percent of total milk consumption between 2006 and 2008. “Organic milk production has been one of the fastest-growing segments of organic agriculture in the nation in the past decade, and the Northeast produces approximately 25 percent of the organic milk in the United States. Organic represents a tremendous potential to maintain rural economies and preserve working landscapes through profitable organic dairy farms,” Brito said.

Despite the challenges of organic dairy farming, the industry is attractive to small Northeastern dairy farmers – existing and newcomers -- who can potentially earn slightly higher profits while remaining a small dairy farm.

“In the Northeast, younger people or people who are changing careers can go into organic dairy farming and maintain some modicum of living. It does offer more economic opportunities, which is why we are also seeing conventional dairy farmers taking advantage of the opportunity to go organic,” Dave Townson said.

UNH is home to the 300-acre Organic Dairy Research Farm, a facility of the NH Agricultural Experiment Station. It is the first organic dairy farm at a land-grant university and the only one in the Northeast.