Kerry: Time is Running Out to Address Climate Change

Secretary of State John Kerry said climate change is already changing the world in real and significant ways, like serious food shortages. He said the world needs to confront the threat of climate change now while there is still time. 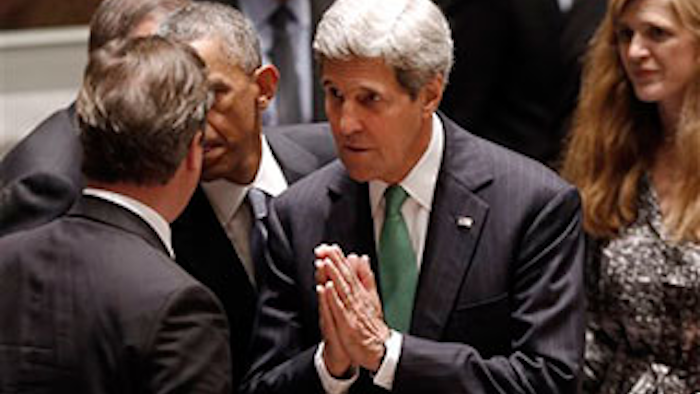 BOSTON (AP) — Secretary of State John Kerry said Wednesday that the U.S. and the world need to confront the threat of climate change while there's still time.

Kerry said climate change is already changing the world in real and significant ways, from serious food shortages to increasing temperatures to the threat of rising sea levels. But those changes also bring the potential of millions of new jobs to develop the renewable energy industry, he said, provided the U.S. and the rest of the world act now.

"We still have in our hands a window of opportunity to make the difference," he said. "But the window is closing quickly. That is not a threat. That is a fact."

Kerry made the comments after touring a Boston wind technology testing center with his British counterpart, Philip Hammond, who echoed Kerry's remarks.

"This is a battle that we have to win for the sake of our long-term security," Hammond said. "We do not accept that we have to choose between prosperity and the future of our planet."

The Wind Technology Testing Center, located on Boston's waterfront, is the first in the country capable of testing large-scale wind turbine blades up to 90 meters in length. The center also acts as an independent certifier of wind blade designs, with the goal of helping reduce the costs of the technology.

Massachusetts is home to what could be America's first large-scale offshore wind farm.

The Cape Wind project is a proposed 130-turbine facility off the coast of Cape Cod. The project, which has been in the planning stages for more than a decade, is slated to begin construction next year.

A large area off the coast of Massachusetts, south of Martha's Vineyard, is also being opened up for other commercial wind energy projects.

The proposed area announced this year is more than 1,160 square miles (3,000 sq. kilometers) — larger than the land area of Rhode Island — and will nearly double the federal offshore land area available for commercial-scale wind energy projects.

Gov. Deval Patrick said the state is leading the way for the country, noting that Massachusetts has topped other states in energy efficiency over the last three years.

He also said about 100,000 people are working in the state's clean-energy sector.

"There is no niche center of our economy," Patrick said. "This is a powerhouse."

Kerry said the economic changes are already happening. The U.S. is continuing to increase the amount of power generated by wind, solar and other sources of renewable energy, he said.

"A clean energy future is not a fantasy," Kerry said.