A federal appeals court ruled Friday that California can keep in place its ban on the sale of foie gras. In doing so, the 9th U.S. Circuit Court of Appeals signaled that a lawsuit filed by foie gras producers seeking to invalidate the California law was on its last legs. 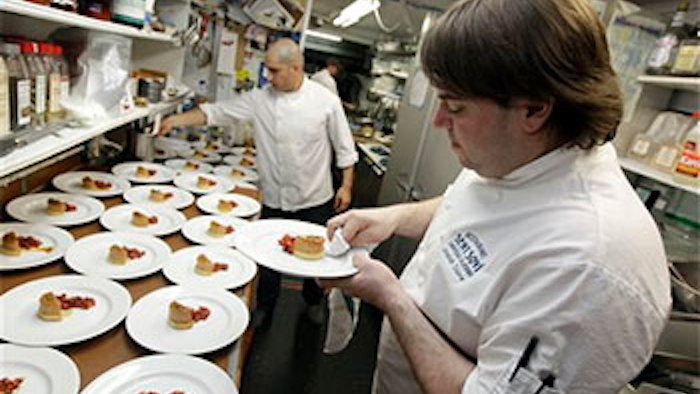 SAN FRANCISCO (AP) — A federal appeals court ruled Friday that California can keep in place its ban on the sale of foie gras.

In doing so, the 9th U.S. Circuit Court of Appeals signaled that a lawsuit filed by foie gras producers seeking to invalidate the California law was on its last legs.

The appeals court said the producers of the delicacy — the fatty liver of a force-fed goose or duck — "failed to raise a serious question that they are likely to succeed on the merits" of the lawsuit. The producers wanted the appeals court to lift the ban while their lawsuit is under consideration in a Los Angeles federal court.

The three-judge appeals panel rejected the producers' arguments that the ban illegally interferes with commerce and is too vaguely worded, among other claims, indicating the court's doubts about the underlying lawsuit in the process.

The ruling upheld a lower court decision, which expressed similar skepticism about the lawsuit filed last year by Canadian and New York producers of foie gras.

"This isn't like fireworks, nobody is being harmed by foie gras," said Henley, who noted some California consumers continue to legally order foie gras online.

The California law bars state farmers from force-feeding birds with a tube, the procedure used to produce foie gras. It also bans sales of the delicacy.

The Legislature concluded tube-feeding birds to engorge their livers is cruel.

Chicago passed a similar law but later repealed it.