Did you know that eating alone has become as normal as eating together? Eating alone is fast becoming the new normal. The Hartman Group’s analysis of how we eat as a culture shows that today a fairly astounding 46% of all adult eating occasions (up from 44% in 2010) are undertaken alone.

BELLEVUE, Wash. (Hartman Group) — Did you know that eating alone has become as normal as eating together? Eating alone is fast becoming the new normal. The Hartman Group’s analysis of how we eat as a culture shows that today a fairly astounding 46% of all adult eating occasions (up from 44% in 2010) are undertaken alone.

For a majority of consumers, what constitutes a "meal" today has transformed from traditional, sit-down "meat and potatoes with the family" into a constantly shifting assortment of snacking and eating alone occasions. We’re giving up meal occasions with others or combining eating with other tasks as the need for productivity compels us to move forward. In just the past few years, our ethnographers, working within households all across America, have witnessed the rapidly developing habit among consumers to eat alone even when dining with others—much of this brought about by mobile technology proliferation.

The rare event of the "Oh, I guess I have to eat by myself" solitary meal occasion (typically fulfilled by the likes of Swanson TV dinners or heating a can of Campbell's soup) is now a normative meal occasion. Many companies continue to market to traditional family occasions and are missing out on the emerging possibilities concealed within the eating alone occasion for a vast number of adults.

You may have heard us refer to the notion that our culture is evolving from a traditional, status-quo culture to one that is reimagined, consumer-driven and experiential. One stunning example of this is the manner in which many of us eat today, which nearly half the time is completely alone. In fact, in certain settings (such as the workplace), eating alone has become so pervasive that many of us don't realize we’re doing it anymore—underscoring what a ubiquitous behavior solitary eating is. The rise of eating alone has been fed by a number of trends: 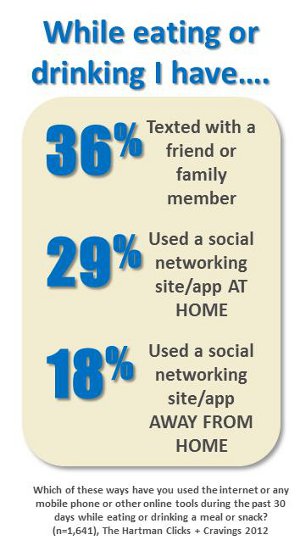 Dismantling Social Dining
One of the most interesting aspects of the trend toward eating alone is the notion that it represents the dismantling of the communal meal and the way we "used to eat": historically, eating was something social, and often implied something done with others where stories were told and events of the day might be shared. While less acknowledged, eating socially also serves several purposes with nutritional and dietary benefits, including:

The Ins and Outs of Eating Alone
While there are positive aspects to eating alone, which we'll describe later in this discussion, of great interest is our finding that consumers eating alone tend to veer far away from some of the positive effects of social dining just described. In particular, we see them:

And yet, while eating alone is often described as a lonely prospect, riddled with pitfalls related to poor dietary judgment and introspective nutritional fixations, we see that the growing trend of eating alone is also influencing some profoundly positive and different ways of looking at such an occasion. Consider the following:

Food for Thought
Rules no longer really apply for eating occasions, especially when it comes to eating alone. Many companies continue to market to family occasions and iconic meals of the past, missing the opportunity to market to the vast number of adults who are increasingly eating alone. Consider:

With brands from Almay to Elizabeth Arden, Revlon had been a mainstay on store shelves for decades.
Jun 16th, 2022
Follow Us
Most Recent