Think Wall Street trading is brutal? Head up to the grittiest part of the South Bronx, where cutthroat deals are made in the dead of night on a massive concrete floor that reeks of fish guts. The New Fulton Fish Market is the nation's largest seafood market, and second in the world to Tokyo's. 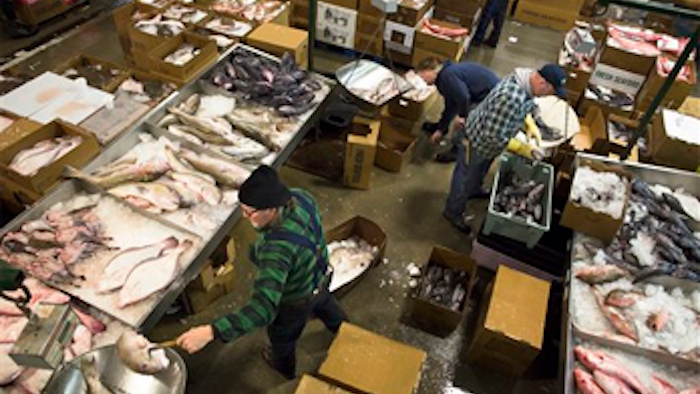 NEW YORK (AP) — Think Wall Street trading is brutal? Head up to the grittiest part of the South Bronx, where cutthroat deals are made in the dead of night on a massive concrete floor that reeks of fish guts.

The New Fulton Fish Market is the nation's largest seafood market, and second in the world to Tokyo's. Here, in a refrigerated building the size of six football fields, fishmongers are frenetically filleting, selling and packaging seafood — 200 million pounds a year worth close to $1 billion by some estimates. It is headed for restaurant tables, stores and mouths across America.

Glistening under the fluorescent lights is just about every sea creature. Most come in by truck, but about half are flown in from the ends of the Earth: Arctic char from Iceland; mahi-mahi from Ecuador; hamachi from Japan; branzino from Greece; salmon from Scotland; cockles from New Zealand.

Experienced buyers negotiate prices in seconds, judging quality on a look, a touch, a smell and often a raw taste.

"You know right away if fish is fresh. It's like looking into a woman's eyes — you know what's there," says Roberto Nunez, a 44-year-old Peruvian immigrant who started out as a dishwasher and has been the buyer for more than a decade for celebrity restaurateurs Lidia Bastianich, her son, Joe Bastianich, and their partner, Mario Batali.

Five nights a week, Nunez shows up at 1 a.m. to purchase as much as $15,000 worth of seafood, enough to meet the demands of 10 restaurants. What's available on any given night depends on a variety of often unpredictable factors, such as severe weather that keeps fishing fleets in port or a spotty catch in an overfished ocean.

"This is not like ordering tomatoes or potatoes," Nunez says. "Seafood is wild."

By 2:30 a.m., one of the key items on his handwritten list of orders — 400 pounds of striped bass — remains unfilled from among dozens of vendors.

"I'm getting nervous," he says.

The day's hundreds of offerings — including crabs, clams, mussels, slimy squid, octopus and caviar — are spread out across the floor in ice-lined boxes, a shimmering spectrum of silvers, pinks, reds and browns. Buyers, some vying for the same, scarce items, point to a specific box and cry out, "That's mine!"

All night, dozens of men in coats and wool caps work to the soundtrack of mini-forklifts whizzing around, honking and spewing exhaust as they move seafood-laden pallets. The smell is a mixture of the fishy and the fresh scent of the ocean.

Nunez finally spots some striped bass. But when he lifts the gills, "it's no good; they're brown," he says dejectedly. (The gills should be bright red). Plus the skin is dry, the eyes are cloudy, and it smells funky.

Nunez later nabs red snapper from the Gulf of Mexico. He feels the fish, smells his fingers. It's fresh. OK, 60 pounds.

At another stall, he pops a raw Nantucket Bay scallop in his mouth, smiling. It's $20.50 a pound compared to a normal price of, say, $16. But these are extraordinary, and fresh — "like a baby's bottom" to the touch.

Just before 3 a.m., a vendor whispers in Nunez's ear: Some striped bass might be on the way — maybe.

He waits around for a while, and sure enough, a box lid opens to reveal eight bass from Delaware, weighing 121 pounds. Now, where to find at least 180 pounds more? He rushes off, scouring the cavernous market. And he gets lucky, landing 100 pounds.

Not far away, Peter Panteleakis, who owns two Greek restaurants in Fair Lawn, N.J., is on a hunt of his own for the freshest seafood he can find, such as the sea scallops that still move when poked and a 21-pound piece of local halibut that a vendor slices open to reveal clean, rosy flesh.

The 66-year-old immigrant from a village near Sparta, Greece, who comes by four nights a week with his son, first set foot in the old open-air Fulton fish market in lower Manhattan more than 30 years ago. It was replaced in 2005 by the state-of-the-art South Bronx facility that's open six nights a week.

When huge pieces of tuna or swordfish worth thousands of dollars come in, men carrying metal hooks and razor-sharp knives leap into action, splitting them into smaller chunks, sweating even in the regulated temperature of about 39 degrees.

At about 5 a.m., bartering slows as the sun peeks over the East River. Blood-stained gloves rest atop the counters. The forklifts are buzzing around, loading 18-wheelers outside with goods that will be trucked all over the Northeast.

What litters the floor — heads, guts and other parts — is scooped up and sold off as well, to make fertilizer, pet food, glue.

As the city awakens and New Yorkers prepare for work, the exhausted fishmongers trickle out of the South Bronx facility to the surrounding Hunt's Point neighborhood of warehouses, truck depots, all-night bars and strip clubs. They will be back at night to do it all over again.