Dealing with changing weather patterns is part of the art of growing wine grapes, a long dance with the elements to achieve a precise combination of sugar levels and acidity expected from one of California's top commodities, a crop worth $3.2 billion on the vine last year. 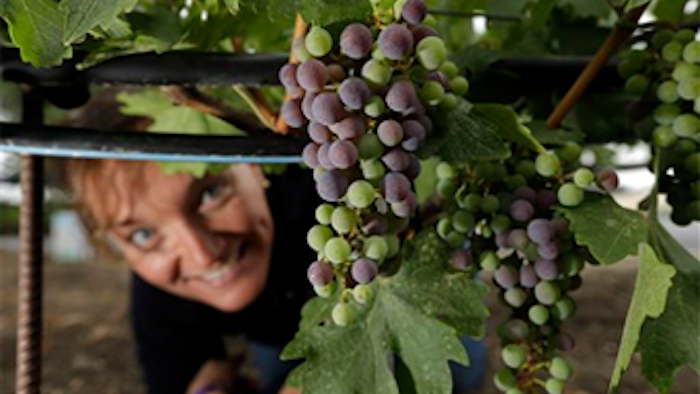 SACRAMENTO, Calif. (AP) — There's no such thing as "normal" weather in California wine country, and vineyard operators say this year that truism could mean good news for wine lovers.

After cool temperatures slowed ripening and kept grapes on the vine until fall in recent years, growers in the nation's premier wine region are facing a heat wave that has made for one of the earliest harvests in recent memory.

"It has been a challenging year," said Michael Silacci, winemaker at Opus One in Napa Valley. "But it's shaping up to be an excellent year."

Weather hasn't been this warm across the region since 1997, a year that produced a highly regarded vintage. If the heat continues as expected it could mean fruit-intensive wines from an early and abundant crop.

"We're a full month ahead of 2009, '10 and '11," said Jon Ruel, COO at Trefenthen Vineyards and president of the Napa Valley Grapegrowers.

Dealing with changing weather patterns is part of the art of growing wine grapes, a long dance with the elements to achieve a precise combination of sugar levels and acidity expected from one of California's top commodities, a crop worth $3.2 billion on the vine last year, which created more than $34 billion worth of wine.

To bring in that harvest, growers are accustomed to being flexible. "There's no such thing as a normal year," Ruel said. "And this isn't a normal year."

Growers can remove leaves to let more sunshine hit fruit. They can drop clusters to improve flavors and quicken ripening in cool years. And they constantly monitor forecasts to know when an early shot of water will help get vines through a heat wave.

For this vintage, vineyard operators started picking grapes used to make sparkling wines this month, a move that came toward the end of August last year. And they're watching cabernet, merlot and pinot noir grapes, which are already in veraison, turning red and starting to ripen.

"Everything is moving at a faster pace," said Silacci, of Opus One, the cellar founded in 1979 by the Rothschilds of France and Robert Mondavi as one of the first for ultra-premium wine in the U.S.

Weather changes are a major factor that makes vintages distinctive. In the case of Opus One, the cool 2011 season produced a Bordeaux blend with herbal and fresh fruit notes. The weather was warmer in 2007, producing wines with the flavor of ripe fruit.

"We want every vintage of wine we make to give you a sense of time and place," Silacci said. "We're not making Budweiser, where a customer wants it to taste the same as the last can."

Growers faced an early harvest in 2004 because it was a relatively warm year. But because it was a very light crop, the grapes ripened quickly. This year's crop is much larger, so it won't ripen quite as early, growers say.

"We would worry that if we had a warm year and a low crop level we'd end up with excessive sugar and tannin development and a very early harvest," said Jason Haas of Tablas Creek.

"Higher yields mitigate against excessive sugar and tannins, which is great," he said, mentioning the compound that gives a dry and bitter finish to red wine.

The early harvest raises concern, however, for growers that rely on extended "hang time," the stint grapes spend on the vine. Many winemakers say time on the vine leads to complex flavors and a sense of place, called terroir.

In Lodi, Layne Montgomery of m2 makes zinfandel with mature flavors and relies more long hang times. He's planning for harvest three weeks ahead of normal. ("Whatever the hell normal is anymore," Montgomery said.) And the schedule gives him pause.

"I need as much time in the vineyard as we can get to get the great flavors," he said. "It's a little worrisome that things are looking so early."

But Montgomery's syrah grapes come from Amador County in the Sierra Foothills and have not endured as much heat. That vineyard is on a similar schedule to last year. And Haas expects to harvest his Rhone grapes in Paso Robles about a week ahead of last year's season.

If August weather goes as expected, "we should be right in line with what we saw last year," said Haas, who described the 2012 vintage as "excellent."