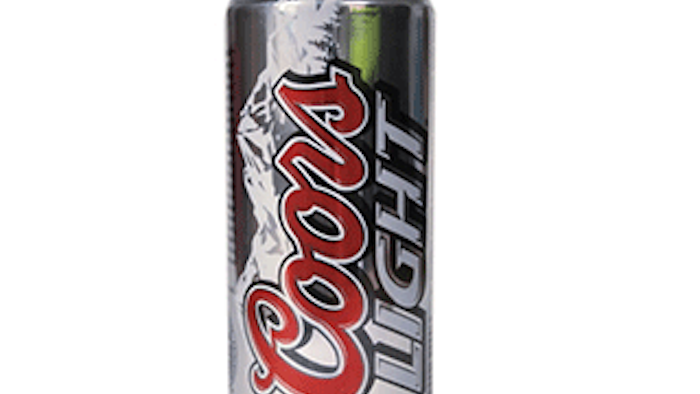 MONTREAL - Molson Coors handily beat expectations as its first-quarter profit surged in part due to an improved performance in Canada despite weakness in the flagship Coors Light beer brand.

The Denver and Montreal-based company, which reports in U.S. dollars, said Wednesday it earned $163.4 million or 88 cents per diluted share for the period ended March 31. That compared with $28.5 million or 16 cents per share a year earlier.

Net sales decreased 1.5 per cent to $816 million, but was up 0.3 per cent excluding currency fluctuations. Worldwide beer volume decreased slightly to 11.9 million hectolitres.

Molson Coors (NYSE:TAP, TSX:TPX.B) was expected to earn 35 cents per share in adjusted profits on $818.4 million of net sales, according to analysts polled by Thomson Reuters.

"Our strong focus on our core brands, portfolio shift to above premium and value creating innovation is paying dividends," CEO Peter Swinburn said during a conference call.

In Canada, the company earned $88.3 million in pre-tax income on $347.1 million of net sales despite weak consumer demand and promotional challenges. That was up from $28.4 million on $395.6 million in the prior year. Underlying pre-tax income increased 20.5 per cent to $35.3 million, while the lower Canadian dollar reduced profits by $2.4 million.

Sales to retail decreased 5.7 per cent due to a variety of factors, including weaker consumer demand, promotional challenges and the loss of the Modelo brands. Excluding this brand loss which represents a one-per-cent reduction on overall company profits, Molson Coors said its Canadian market share decreased 0.5 per cent.

"We have a strong innovation pipeline, which will be led by the expansion of Coors Banquet and our vented can but which will also include two new products that are aimed at recruiting legal age drinkers from outside the beer category," he told analysts.

New advertising will soon be launched to boost Coors Light sales this summer, but the brand's drag has been partially blamed on some consumers switching to Coors Banquet.

In the United States, its stake in MillerCoors generated underlying earnings before interest and taxes of $123.1 million, up 4.9 per cent from the prior year.

The improved performance was driven by a 5.6 per cent growth in volumes helped by good weather, cost savings and a $2.8 million currency gain. While its brands gained market share in many European markets, the company said political unrest in Russia and Ukraine decreased volumes of Staropramen.

Analyst Mark Swartzberg of Stifel Nicolaus said he was encouraged by the 20 per cent increase in EBITDA in the quarter and the company's capital discipline since introducing a new dividend payout target of 18 to 22 per cent of pre-tax operating income.

"Our 12-month target price remains $72 per share, continuing to see upside from improving capital allocation plus unreflected upside if AB-Inbev buys SABMiller," he wrote in a report.