US Pecan Growers Seek To Break Out Of The Pie Shell

Pecan growers and suppliers are hoping to sell U.S. consumers on the virtues of North America's only native nut as a hedge against a potential trade war with China, the pecan's largest export market. 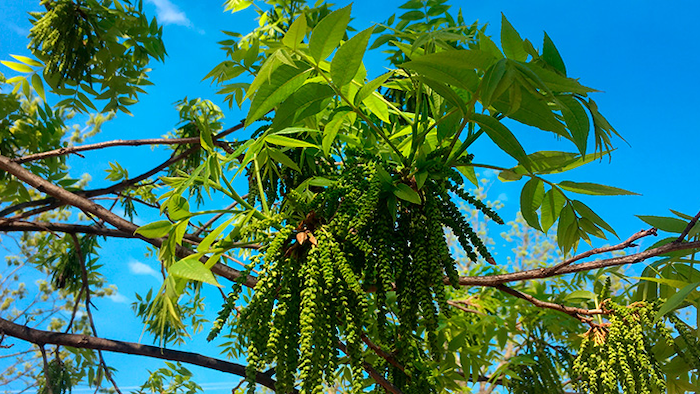 Bud break on a pecan tree on a 14,000-acre pecan farm Tuesday, April 24, 2018, near Granbury, Texas. Pecan growers are embarking on a new campaign to sell their crops as North America's native nut in the face of potential rising tariffs with China, the biggest export market for American pecans. (AP Photo/Emily Schmall)

FORT WORTH, Texas (AP) — The humble pecan is being rebranded as more than just pie.

Pecan growers and suppliers are hoping to sell U.S. consumers on the virtues of North America's only native nut as a hedge against a potential trade war with China, the pecan's largest export market.

The pecan industry is also trying to crack the fast-growing snack-food industry.

The retail value for packaged nuts, seeds and trail mix in the U.S. alone was $5.7 billion in 2012, and is forecast to rise to $7.5 billion by 2022, according to market researcher Euromonitor.

The Fort Worth, Texas-based American Pecan Council, formed in the wake of a new federal marketing order that allows the industry to band together and assess fees for research and promotion, is a half-century in the making, said Jim Anthony, 80, the owner of a 14,000-acre pecan farm near Granbury, Texas.

Anthony said that regional rivalries and turf wars across the 15-state pecan belt — stretching from the Carolinas to California — made such a union impossible until recently, when demand for pecans exploded in Asian markets.

Until 2007, most U.S. pecans were consumed domestically, according to Daniel Zedan, president of Nature's Finest Foods, a marketing group. By 2009, China was buying about a third of the U.S. crop.

The pecan is the only tree nut indigenous to North America, growers say. Sixteenth-century Spanish explore Cabeza de Vaca wrote about tasting the nut during his encounters with Native American tribes in South Texas. The name is French explorers' phonetic spelling of the native word "pakan," meaning hard-shelled nut.

Most American kids grow up with peanut butter but peanuts probably originated in South America. Almonds are native to Asia and pistachios to the Middle East. The pecan council is funding academic research to show that their nuts are just as nutritious.

The council on Wednesday will debut a new logo: "American Pecans: The Original Supernut."

Rodney Myers, who manages operations at Anthony's pecan farm, credits the pecan's growing cachet in China and elsewhere in Asia with its association to rustic Americana — "the oilfield, cowboys, the Wild West — they associate all these things with the North American nut," he said.

China earlier this month released a list of American products that could face tariffs in retaliation for proposed U.S. tariffs on $50 billion worth of Chinese goods. Fresh and dried nuts — including the pecan — could be slapped with a 15-percent tariff, according to the list. To counter that risk, the pecan council is using some of the $8 million in production-based assessments it's collected since the marketing order was passed to promote the versatility of the tree nut beyond pecan pie at Thanksgiving.

While Chinese demand pushed up prices it also drove away American consumers. By January 2013, prices had dropped 50 percent from their peak in 2011, according to Zedan.

U.S. growers and processers were finally able in 2016 to pass a marketing order to better control pecan production and prices.

Authorized by the Agricultural Marketing Agreement Act of 1937, federal marketing orders help producers and handlers standardize packaging, impose quality control and fund research, according to the U.S. Department of Agriculture, which oversees 28 other fruit, vegetable and specialty marketing orders, in addition to the pecan order.

Critics charge that the orders interfere with the price signals of a free, unfettered private market.

"What you've created instead is a government-sanctioned cartel," said Daren Bakst, an agricultural policy researcher at the conservative Heritage Foundation.

Before the almond industry passed its own federal marketing order in 1950, fewer almonds than pecans were sold, according to pecan council chair Mike Adams, who cultivates 600 acres of pecan trees near Caldwell, Texas. Now, while almonds appear in everything from cereal to milk substitutes, Adams calls the pecan "the forgotten nut."

"We're so excited to have an identity, to break out of the pie shell," said Molly Willis, a member of the council who owns an 80-acre pecan farm in Albany, Georgia, a supplement to her husband's family's peanut-processing business.