The Washington Legislature on Friday voted to phase out marine Atlantic salmon aquaculture, an industry that has operated for decades in the state but came under heavy criticism after tens of thousands of nonnative fish escaped into waterways last summer. 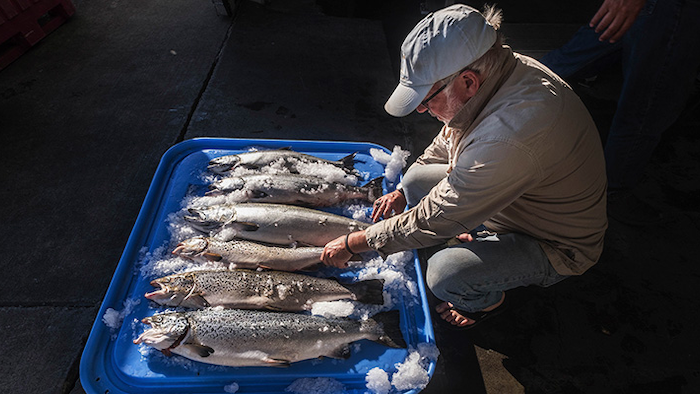 FILE - In this Tuesday, Aug. 22, 2017, file photo, Riley Starks of Lummi Island Wild shows three of the farm-raised Atlantic salmon that were caught alongside four healthy Kings in Point Williams, Wash. The Washington Legislature on Friday, March 2, 2018, voted to phase out marine Atlantic salmon aquaculture, an industry that has operated for decades in the state but has come under fire after tens of thousands of nonnative fish escaped into local waters last summer. (Dean Rutz/The Seattle Times via AP, File)

SEATTLE (AP) — The Washington Legislature on Friday voted to phase out marine Atlantic salmon aquaculture, an industry that has operated for decades in the state but came under heavy criticism after tens of thousands of nonnative fish escaped into waterways last summer.

After lengthy debate, the Senate passed the bill on a 31-16 vote. The House earlier passed it on 67-31 vote and it now heads to Gov. Jay Inslee, a Democrat who has expressed support.

The bill would end state leases and permits for operations that grow nonnative finfish in state waters when current leases expire in 2022.

The bill targets Canada's Cooke Aquaculture Pacific, the largest producer of farmed Atlantic salmon in the U.S., whose net pens in northwest Washington collapsed Aug. 19. Cooke currently has two leases with the state.

State officials last month blamed Cooke's negligence for failing to maintain its net pens. They said the escape of the salmon put the state's ecosystem at risk and fined the company $332,000. Up to 263,000 invasive Atlantic salmon escaped into Puget Sound, raising fears about the impact to native Pacific salmon runs.

Sen. Kevin Ranker, a Democrat who sponsored similar legislation in the Senate, said the "state ban is a strong stance to ensure the protection of our marine environment and native salmon populations."

Joel Richardson, vice president of Cooke, said in a statement that the company was "deeply disappointed" with the bill's passage, the potential impact on the industry and "more than 600 rural workers and their families that rely upon salmon farming for their livelihoods."

He said the company will evaluate its operations and investments in the state and ensure that whatever decision they make puts families and workers first.

Richardson told lawmakers last month that Cooke would be able to seek damages under a provision of the North American Free Trade Agreement if the measure passed. He said the bill would strip the Canada-based company of its $76 million investment in the state in an unfair way. He did not address that issue in his statement Friday.

Sen. Judy Warnick, a Republican, said "we are putting an industry out of business."

Other Republicans who opposed the bill said it would put people out of work, shut down a vital industry and set a bad precedent.

"This is the wrong action tonight and I'm just appalled that this is the direction we're going," said Sen. Shelly Short, a Republican.

Republicans introduced numerous amendments that were rejected, including proposals to allow growing native fish or single-sex Atlantic salmon in net pens and a tax incentive package to help the industry transition to other operations.

Atlantic salmon farming has been in the state since the 1980s but remains controversial in the Northwest, famed for its native Pacific salmon runs and where tens of millions of dollars are spent each year to bring back declining populations of wild Pacific salmon stock.

Washington state joins Alaska, which has banned commercial finfish aquaculture. Oregon and California do not have commercial salmon farming operations.

"Phasing out of industrial ocean fish farms in Washington is a victory for our oceans and coastal communities," said Hallie Templeton with Friends of the Earth in a statement.

Cooke, based in New Brunswick, Canada, is the only company to farm Atlantic salmon in state waters. The company bought operations from Icicle Acquisition Subsidiary in 2016. It was in the process of getting permits for an expanded operation near Port Angeles when the net pens off Cypress Island capsized.