USDA Petitioned To Include Poultry In Humane Slaughter Law

As Americans prepare to consume some 45 million turkeys on Thanksgiving, an animal rights group asked the U.S. Department of Agriculture on Wednesday to require more humane treatment for turkeys, chicken and other poultry as the birds are sent to slaughter. 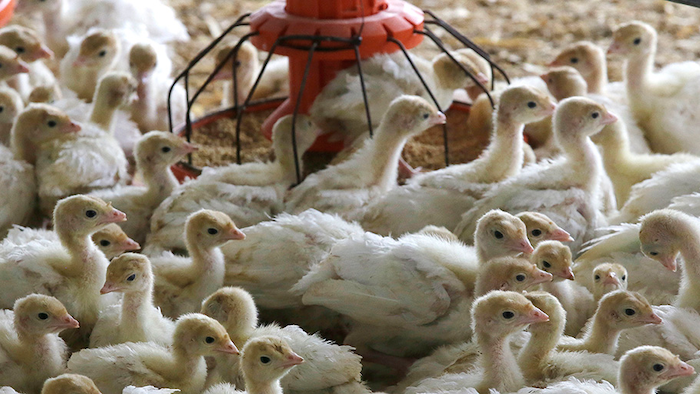 DES MOINES, Iowa (AP) — As Americans prepare to consume some 45 million turkeys on Thanksgiving, an animal rights group asked the U.S. Department of Agriculture on Wednesday to require more humane treatment for turkeys, chicken and other poultry as the birds are sent to slaughter.

California-based Mercy For Animals filed a petition with the USDA that seeks to have poultry covered under the Humane Methods of Slaughter Act. The 1958 law requires that pigs, cows and a list of other animals be free from neglect, abuse and pain as they make their way through a packing plant. The law excludes poultry.

"Chickens, turkeys and other birds are every bit as capable of experience pain and suffering as the cows pigs and sheep who are protected under the humane slaughter act, and it simply makes no sense to exclude these animals from equal protection under the law," said Vandhana Bala, an attorney for Mercy For Animals.

A USDA spokeswoman said the agency didn't have an immediate comment but would release a response later Wednesday.

Tom Super, a spokesman for the National Chicken Council, a trade group for companies that raise chickens for meat, said including poultry in the law is unnecessary, in part because poultry processors "already have strong moral and financial motivation to ensure chickens are handled properly." At least one large poultry producer has already voluntarily made changes.

Nearly 9 billion chickens raised for meat were slaughtered last year, along with 243 million turkeys and 27 million ducks, according to the USDA.

The petition, filed with the USDA's Food Safety and Inspection Service, alleges that cases have been documented of chickens scalded to death in tanks of hot water or having legs and wings cut off by errant beheading machines while alive and conscious.

Mercy For Animals' video undercover investigations have shown slaughterhouse workers ripping heads off chickens and violently slamming birds into shackles. In a 2015 case, five workers at a processing plant in California were suspended and a fired worker eventually pleaded no contest to animal cruelty; the same year in Mississippi, the group filed criminal affidavits but no regulatory or criminal charges were filed.

Such violations in a beef or pork processing plant would result in punitive action by regulators.

Super, the National Chicken Council spokesman, said the law cited in the petition was specifically written for large animals in the red meat industry.

"It wasn't designed to accommodate chicken. In fact, trying to shoehorn chicken harvesting into the Humane Methods of Slaughter Act would probably inflict drastic welfare harm on chickens," he said. "It's a square-peg-round-hole situation."

Maryland-based Perdue Farms, the nation's fourth largest poultry producer, voluntarily began last year making changes to phase out electric stunning and to adopt a gas system considered more humane. The changes came in response to increasing consumer interest in how animals are raised and how food is produced.

Bruce Stewart-Brown, who heads Perdue's food safety, quality and live production operations, said the company has used the gas system for turkeys and started using it in a chicken plant a few weeks ago. He said the system contributes to a much improved atmosphere in which the animals are gently put down.

"In general we don't think you have to regulate us into acting right or doing the right thing," he said. "I guess the other part of that is if consumers care enough about it, they'll vote with their pocketbooks toward people who are doing it a certain way."