A nonprofit group wants coffee manufacturers, distributors and retailers to post ominous warnings about a cancer-causing chemical stewing in every brew. 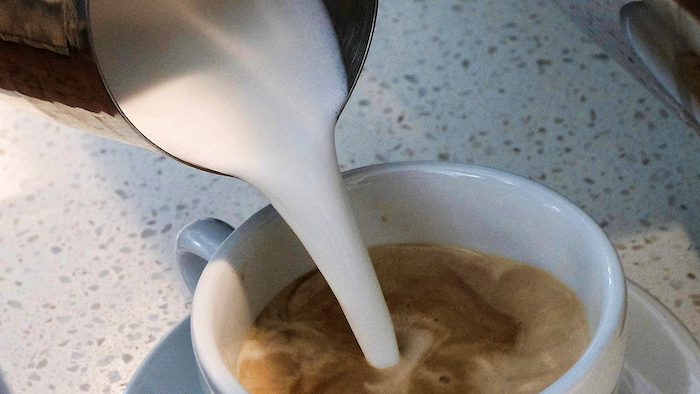 LOS ANGELES (AP) — A future cup of coffee in California could give you jitters before you even take a sip.

A nonprofit group wants coffee manufacturers, distributors and retailers to post ominous warnings about a cancer-causing chemical stewing in every brew and has been presenting evidence in a Los Angeles courtroom to make its case.

The long-running lawsuit that resumed Monday claims Starbucks and about 90 other companies, including grocery stores and retail shops, failed to follow a state law requiring warning signs about hazardous chemicals found everywhere from household products to workplaces to the environment.

At the center of the dispute is acrylamide, a carcinogen found in cooked foods such as French fries that is also a natural byproduct of the coffee roasting process. The coffee industry has acknowledged the presence of the chemical but asserts it is at harmless levels and is outweighed by benefits from drinking coffee.

Although the case has been percolating in the courts since 2010, it has gotten little attention.

A verdict in favor of the little-known Council for Education and Research on Toxics could send a jolt through the industry with astronomical penalties possible and it could wake up a lot of consumers, though it's unclear what effect it would have on coffee-drinking habits.

The lawyer taking on Big Coffee said the larger goal is to motivate the industry to remove the chemical from coffee, which would also benefit his own three-cup-a-day fix.

"I'm addicted — like two-thirds of the population," attorney Raphael Metzger said. "I would like the industry to get acrylamide out of the coffee so my addiction doesn't force me to ingest it." 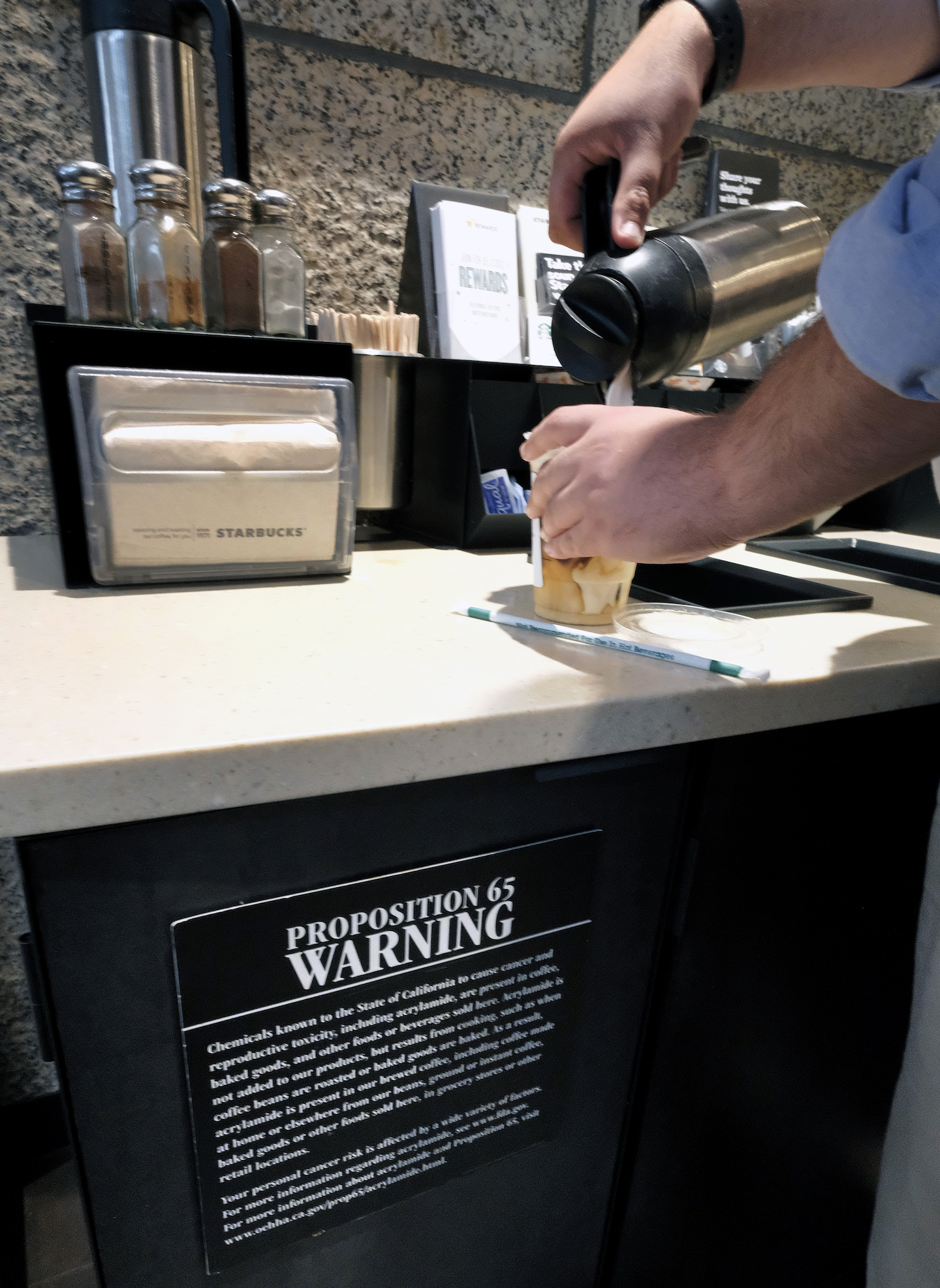 In this photo taken Friday, Sept. 22, 2017, a customer pours milk into coffee near a posted Proposition 65 warning sign at a Starbucks coffee shop in Los Angeles. In a long-running court case playing out in a Los Angeles courtroom, a nonprofit has been presenting evidence to show that coffee companies should post ominous warning labels about a cancer-causing chemical in every cup. (AP Photo/Richard Vogel)

Under the Safe Drinking Water and Toxic Enforcement Act, passed by voters as Proposition 65 in 1986, private citizens, advocacy groups and attorneys can sue on behalf of the state and collect a portion of civil penalties.

Metzger represented the council in a case later taken up by the state attorney general that resulted in potato-chip makers agreeing in 2008 to pay $3 million and remove acrylamide from their product.

The law has been roundly criticized for abuses by lawyers shaking down businesses for quick settlements but is also credited with reducing chemicals known to cause cancer and birth defects, such as lead in hair dyes, mercury in nasal sprays and arsenic in bottled water.

But warnings, which can be startling on first encounter, have been less effective due to sometimes inconspicuous placement or vague language. Drivers everywhere appear to prioritize parking in a garage over warnings such as, "This area contains chemicals known to the state of California to cause cancer, birth defects and other reproductive harm."

The state Office of Environmental Health Hazard Assessment adopted new regulations last year that will require more specific warnings that list the chemical consumers may be exposed to and list a website with more information. Parking garages, for example, will have to post that breathing air there exposes drivers to carbon monoxide and gas and diesel exhaust and warns people not to linger longer than necessary.

"The intent is not to scare people," said Allan Hirsch, chief deputy of the office. "The intention is to help people make more informed decisions. If you continue to buy a product that will expose you to a chemical, that's OK as long as you're informed."

Many of the coffee defendants have already posted warnings that specifically say California has determined acrylamide is among chemicals that cause cancer and attorneys have stated others, from mega-chains to mom-and-pop operations, will follow suit if the judge rules against them.

Metzger said many of those warnings often appear after the point of sale or where cream and sugar is provided, which offers no warning to someone drinking black coffee.

Coffee companies lost a first round in the case two years ago and are now presenting their last defense.

Defense lawyers declined to comment on the case but asserted in court that they should prevail under an exemption for chemicals that result naturally from cooking necessary for palatability or to avoid microbiological contamination.

"It is hard to imagine a product that could satisfy this exemption if coffee does not," defense attorney James Schurz said in court papers. "The answer to the question of whether Proposition 65 requires coffee to carry a cancer warning must be an emphatic 'No.'"

In the first phase, Superior Court Judge Elihu Berle said the defense failed to present enough credible evidence to show there was no significant risk posed by acrylamide in coffee. The law puts the burden on the defense to show that the level of the chemical won't result in one excess case of cancer for every 100,000 people exposed. Berle said the epidemiology studies they presented were inadequate to evaluate that risk.

Civil penalties could come to $2,500 per person exposed each day. With penalties reaching back eight years that could ring up an astronomical bill in a state with close to 40 million residents, though such a massive figure is very unlikely.

Starbucks Corp., the lead defendant, would not comment on the case. Its latest quarterly report said it's not "party to any legal proceeding that management believes could have a material adverse effect on our consolidated financial position, results of operations or cash flows."

Two of the defendants have settled in the past month and agreed to post warnings. BP West Coast Products, which operates gas station convenience stores, agreed to pay $675,000. Yum Yum Donuts Inc. agreed to pay nearly $250,000.