With as many as 70 oil trains rumbling across Pennsylvania each week, the administration of Gov. Tom Wolf on Monday released a series of recommendations meant to reduce the risk of a catastrophic derailment, including reduced speeds through cities, beefed-up track inspections and a call for trackside communities to plan for an emergency. 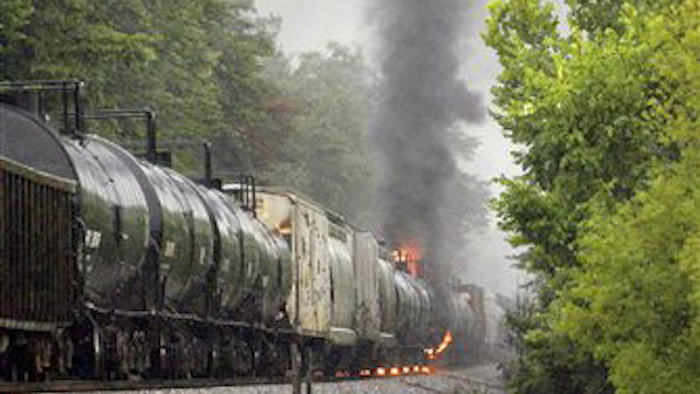 With as many as 70 oil trains rumbling across Pennsylvania each week, the administration of Gov. Tom Wolf on Monday released a series of recommendations meant to reduce the risk of a catastrophic derailment, including reduced speeds through cities, beefed-up track inspections and a call for trackside communities to plan for an emergency.

Wolf has expressed "grave concern" about the trains' safety in the wake of several fiery crashes. CSX and Norfolk Southern carry huge volumes of crude through Pennsylvania to refineries in Philadelphia and elsewhere.

The crude, from the Bakken Shale region of North Dakota, is unusually volatile. A train carrying Bakken crude derailed in Quebec two years ago, causing a fire and explosion that killed 47 people and leveled the downtown.

The report notes CSX and Norfolk Southern already follow many of the best practices it identified.

"Protecting Pennsylvanians is my top priority and Dr. Zarembski's report is important in helping my administration take the necessary steps," Wolf said in a statement. "I will also continue to work with CSX and Norfolk Southern, both of which have demonstrated concern for rail safety and an interest in working with my administration."

Norfolk, Virginia-based Norfolk Southern issued a statement Monday saying it is already increasing inspections of tracks that carry oil trains and taking other measures that show its "strong commitment to safety and to the communities through which we operate."

Jacksonville, Florida-based CSX did not immediately issue a response to the Pennsylvania recommendations.

Zarembski's report said the Pennsylvania Emergency Management Agency should conduct an emergency response exercise with communities along the tracks and ensure that those communities have their own emergency plans.

It also called on CSX and Norfolk Southern to voluntarily slow their trains to 35 mph through Philadelphia and Pittsburgh.

The federal government, which has primary responsibility for regulating railroads, has mandated a 40 mph speed limit through cities with populations of at least 100,000. But at least one railroad, BNSF Railway, which operates in the West, has committed to a 35 mph limit in major urban areas.

Norfolk Southern did not immediately say whether the railroad would comply with Wolf's request for a voluntary 35 mph speed limit.