A Look at The Keystone XL Pipeline's Long Road to Rejection

President Barack Obama's decision to reject TransCanada's application to build the Keystone XL pipeline was seven years in the making. 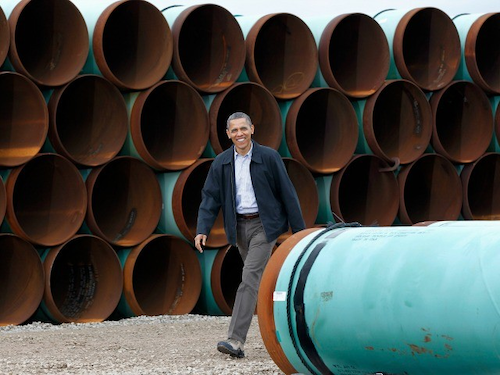 WASHINGTON (AP) — President Barack Obama's decision to reject TransCanada's application to build the Keystone XL pipeline was seven years in the making. Since the company first proposed the 1,179-mile pipeline, the project has been studied, stalled, slammed and hyped — all amid intense political pressure from powerful interests on both sides of the debate. Here's a look at the Keystone XL pipeline's long road to rejection:

Sept. 19, 2008 — TransCanada submits an application for a presidential permit for the Keystone XL pipeline. The pipeline would extend from Canada's tar sands through Montana, South Dakota and Nebraska and connect with existing pipelines to carry more than 800,000 barrels of crude oil a day to specialized refineries along the Texas Gulf Coast. Because the pipeline crosses the border, the State Department must determine whether it is in the national interest.

Oct. 15, 2010 — As the permit is reviewed, then Secretary of State Hillary Rodham Clinton says the department is "inclined" to approve project. "We're either going to be dependent on dirty oil from the Gulf or dirty oil from Canada," she said. The project begins to galvanize the environmental movement to pressure the administration to act on climate change. Republicans and other project supporters argue the project will create jobs and juice the economy.

Aug. 26, 2011 — The State Department issues its final environmental impact statement determining "there would be no significant impacts to most resources along the proposed project corridor."

Nov. 10, 2011 — Amid intense political pressure, President Barack Obama announces a delay pushing off a decision until after his reelection campaign. The administration says other potential routes through Nebraska needed to be studied.

Dec. 23, 2011 - Congress tries to force Obama's hand by passing legislation requiring approval of the Keystone XL pipeline within 60 days unless the president determines the project does not serve the national interest. Weeks later, Obama rejected the application, but allowed TransCanada to re-apply.

May 4, 2012 — TransCanada reapplies and restarts the review process.

March 1, 2013 — The State Department issues an environmental review that raises no major objections to the Keystone XL oil pipeline and says other options to get the oil from Canada to Gulf Coast refineries are worse for climate change.

June 25, 2013 — Obama declares he will only approve the project if it doesn't worsen carbon pollution. "Our national interest would be served only if this project does not significantly exacerbate the problem of carbon pollution," Obama says in a speech declaring that fighting climate change will be a major priority his second term.

Feb. 19, 2014 — A Nebraska judge overturns the state law that allowed the pipeline, throwing the project into legal limbo.

April 18, 2014 — The State Department announces it is again delaying its review, citing the legal dispute over the Nebraska route.

Feb. 11, 2015 — Congress again tries to push the Obama administration to decide on the permit by passing legislation forcing the decision and sending it to the White House. Obama vetoes the bill days later.

Nov. 2, 2015 — As it appears increasingly likely that Obama will reject the pipeline, TransCanada asks the administration to suspend its application. The State Department reviews the request for a day and rejects it.

Nov. 6, 2015 — Obama announces he is rejecting the permit to build the Keystone pipeline. The project is not in the national interest, he says. "America is now a global leader when it comes to taking serious action to fight climate change. And frankly, approving this project would have undercut that global leadership," he says.