China's Cabinet announced on Tuesday the firing of the top two officials where an explosion at an auto parts factory in August killed 146 people in the country's worst industrial accident since 2005. A national investigation team found that plant management failed to provide safety training for workers and ignored rules on building spacing, density in manufacturing lines, dust cleanup, and use of anti-explosion equipment. 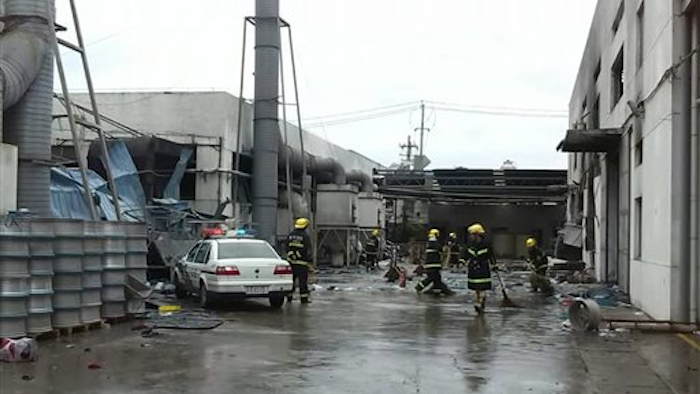 BEIJING — China's Cabinet announced on Tuesday the firing of the top two officials in an eastern city where an explosion at an  auto parts factory in August killed 146 people in the country's worst industrial accident since 2005.

The State Council also issued disciplinary demerits against a deputy provincial governor and the director of the provincial work safety bureau, and 18 other people — including factory executives and several safety and fire officials — were placed under judicial review for possible indictment, the official Xinhua News Agency said.

The dust explosion at Zhongrong Metal Products Co. Ltd. in the city of Kunshan killed 75 people immediately. The death toll climbed to 146 when other workers died in the hospital. The factory supplied parts to General Motors.

Dust explosions can occur when tiny metal particles — in this case powdered aluminum — are suspended in air in an enclosed space.

The accident was China's worst industrial disaster in nine years and highlighted continuing problems with workplace safety. A 2005 mine accident in northeastern China killed 171 people.

Last June, a poultry plant fire killed 121 and injured 76 others in northeastern China. On Friday, courts sentenced two fire chiefs and two poultry farm bosses to prison terms of up to nine years for the deadly blaze.

Beijing has been holding local government officials and company executives accountable by meting out harsh penalties for work accidents with high casualties.

In Kunshan, a national investigation team found that local officials were negligent in enforcing safety regulations and that plant management failed to provide safety training for workers and ignored rules on building spacing, density in manufacturing lines, dust cleanup, and use of anti-explosion equipment.