Despite Luminant's cash crunch and crushing debt, the Texas Railroad Commission, which oversees mining permits, has allowed the company to expand its operations. Even with bankruptcy looming, Texas has granted the company a new permit to self-bond as it expands a mine in the Tatum area. 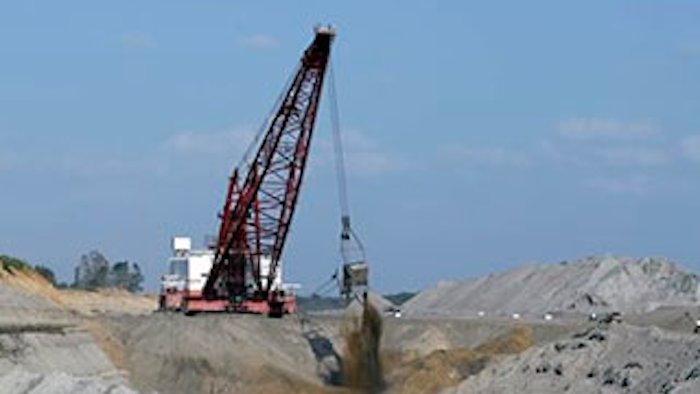 TATUM, Texas (AP) — Scattered between the green rolling hills and thick pine forests of East Texas are small towns that have one thing in common: For generations, they have relied on coal mines and power plants for jobs, population growth and economic development.

The industry helps define Tatum, a community barely a half-hour from the Louisiana border. The Little League team is called the Miners, and their fields were paid for by utility companies. Year after year, hilltops are cleared by strip mining, then restored with grass, trees and ponds, before another hill is scoured for coal.

But that process is now at risk because one of the region's major mining companies is on the brink of bankruptcy. Besides the potential economic damage, bankruptcy could mean that heavily mined land goes unrestored because Luminant Mining Co. was allowed to operate without a reserve fund to pay for reclamation. The company insists it has sufficient money available to meet all of its responsibilities.

Luminant and its parent company are struggling with more than $30 billion in debt and a rapidly dwindling cash flow. Analysts have said bankruptcy is possible within months.

A nearly 40-year-old federal law forces mining companies to set aside money for reclamation of the land before any mining starts. In Texas, large companies that have at least $10 million and other assets are allowed to do this through a process called self-bonding, which means the state trusts the company to have the money to restore the land.

Despite Luminant's cash crunch and crushing debt, the Texas Railroad Commission, which oversees mining permits, has allowed the company to expand its operations. Even with bankruptcy looming, Texas has granted the company a new permit to self-bond as it expands a mine in the Tatum area. The only caveat: Luminant must produce an unaudited financial statement every 90 days.

Some environmental groups such as the Sierra Club are worried that might not be enough. They fear if the company is forced to shut down power plants or mining operations in a restructuring, it might not have the millions of dollars needed for restoration.

"It's more of a concern to me that we the taxpayers will have to flip the bill when they were supposed to set the money aside," Kaine Anderson, a lifetime resident of nearby Carthage said as he watched his son's baseball practice in Tatum. Both towns depend on Luminant for taxes and jobs.

Until now, Luminant has restored all the areas it has finished mining — more than 70,000 acres. Its parent company says that practice will not change even under bankruptcy, partly because the company does not intend to shut down any power plants or mines when it is restructured.

Jim Hempstead, a senior vice president and analyst for Moody's who has been following the company for more than 20 years, said lenders and investors — who would become the primary stakeholders in the company after a restructuring — could still decide to shut down plants and mines regardless of the wishes of Luminant executives.

Stakeholders could also decide the cost to ensure compliance with new federal environmental regulations for coal-fired facilities — estimated by the company at more than $1 billion — is simply too high, he said.

The first financial report Luminant filed with the Railroad Commission in March detailed the company's debt. Nearly all of its assets, including the power plants, are collateral for loans, and Luminant is a guarantor for the parent company's debt.

The commission says Luminant has 13 surface mining permits and a cumulative self-bond of more than $1 billion. If the company were to default on its responsibilities, the commission estimates it would cost the state more than $910 million to restore the land. Earlier this month, Luminant estimated its reclamation costs at about $101 million.

When any bankruptcy case is settled, Luminant could be forced to close some power plants or mines, which are becoming less attractive businesses because of the cost of coal-fired operations, Hempstead said.

In Luminant's case, shutting down a power plant means nearby mines would close because they use lignite coal — a soft, wet variety that can't be transported long distances. As a result, the company has built its plants within a few miles of the mines. When mining stops, reclamation begins.

Residents, though, are wary.

"If they're looking at them every 90 days, that tells you everything," Anderson said.

But their lives and towns are closely entwined with Luminant, its success, and its potential failure.

Several generations of Cindy Jones' family have battled with Luminant over land on the outskirts of Tatum. Her grandfather, Walter Young, felt he was forced in the 1970s to hand over 100 of his 135 acres to Luminant's predecessor when it built a reservoir needed for the power plant's cooling system.

Now, the company wants the rest of the family's land for mine expansion, but they refuse to sell, Jones said.

"I wouldn't mind to see them shut down and go away," she said.

Then again, she notes, her husband has a good-paying job as a Luminant train driver. She has relatives and friends who also work for Luminant.

"It's like working for the devil," she muses, then adds, "It would really be bad if they went under."