In September, the deficit rose to $43 billion as American exports slumped. The drop in exports was seen as a sign that the U.S. economy was beginning to feel the impact of weakening global growth. But economists believe the trade gap, the difference between imports and exports, will narrow a bit in October, reflecting a fall in world oil prices that will lower American's bills for imported oil. 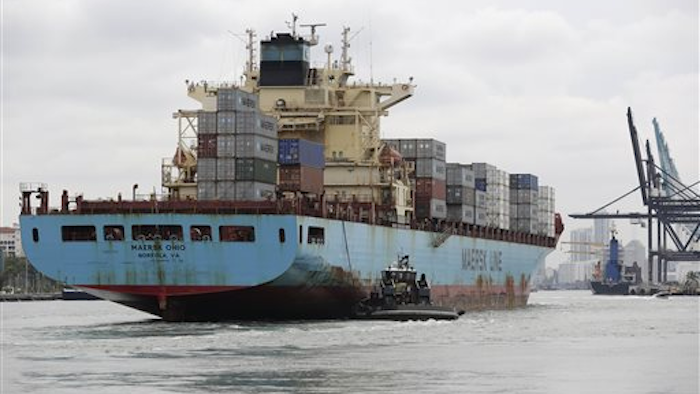 WASHINGTON — According to a survey of economists by data firm FactSet, the deficit is expected to narrow slightly to $41.6 billion in October.

In September, the deficit rose to $43 billion as American exports slumped. The drop in exports was seen as a sign that the U.S. economy was beginning to feel the impact of weakening global growth. But economists believe the trade gap, the difference between imports and exports, will narrow a bit in October, reflecting a fall in world oil prices that will lower American's bill for imported oil.

Analysts also believe that the September drop in exports overstated the weakness in overseas demand for American goods and they are looking for some recovery in exports in October. However, economists believe there is a limit to how much exports will rebound. They still see economic weakness in Europe and a slowdown in China, two big markets for American products, as dampening the ability of American producers to boost sales overseas.

America's trade deficit has been helped by a boom in American energy production, which has lifted energy exports to an all-time high and reduced America's need for imported oil. But the drop in global oil prices means that U.S. oil producers are earning less at the same time that Americans are paying less for foreign oil. Global oil prices, which had been above $100 per barrel in June, have now dropped below $70 per barrel.

The politically sensitive trade deficit with China surged by 17.6 percent in September to an all-time monthly high of $35.6 billion. The release of the new Apple iPhone likely fueled much of the surge in imports during the month.

The deficit with China is on track to set another record for the full year, creating more pressure for Congress and the Obama administration to curb what critics contend are unfair tactics such as currency manipulation that they contend China is employing to gain trade advantages over U.S. companies.

The widening trade gap with China is coming at a time when the Obama administration hopes to finally get Congress to approve the fast-track authority it needs to wrap up a major 12-nation trade agreement with Pacific Rim countries known as the Trans-Pacific Partnership. The administration sees the trade deal as one of the areas where President Barack Obama may be able to find common ground with Republicans who will control both the House and Senate in the new Congress.