Scientists from several universities are working to learn whether a gas well that blew wild last week off the Louisiana coast is polluting the Gulf of Mexico. As the researchers worked, federal and private vessels could be seen coming and going from the site. 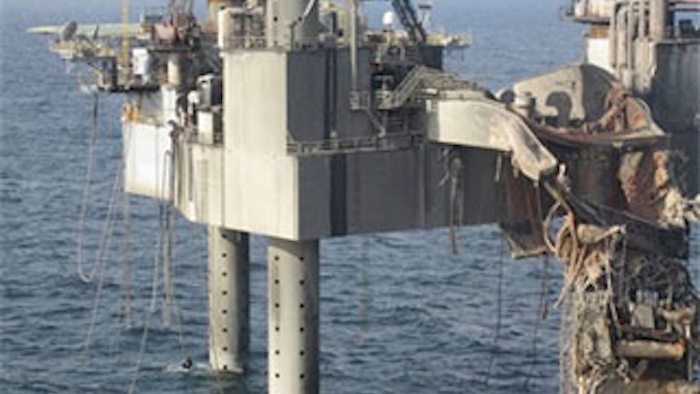 NORTHERN GULF OF MEXICO (AP) — Scientists from several universities are working to learn whether a gas well that blew wild last week off the Louisiana coast is polluting the Gulf of Mexico.

Joseph Montoya, a biology professor with Georgia Tech, was performing tests aboard a vessel near the site of the 2010 BP oil spill when the Hercules 265 well blew Tuesday and caught fire. All 44 people on the rig were evacuated and not hurt.

"We organized a rapid response cruise to get some of our scientists out here," he said Saturday while near the Hercules rig.

A 10-member crew used buckets, hoses and various canisters to collect water samples to measure levels of methane gas, radon gas, metabolic activity and bacteria, among other things. They did so about 5 miles away because that's as close as the Coast Guard would let them get.

They also released long cylinders that will drift with the current, tracking the likely path of any contamination. The "drifters" have global positioning devices and transmitters.

As the researchers worked, federal and private vessels could be seen coming and going from the site.

Federal officials said natural gas detectors and high-capacity water hoses were being installed on the burned rig. Another rig was being readied to dig a relief well for a permanent plug. The Bureau of Safety and Environmental Enforcement said it approved Walter Oil's permit to drill a relief well, and crews were preparing the Rowan EXL-3 rig for drilling. Once the drill gets into the original pipe, drilling mud and then cement will be pumped in as a permanent seal.

There was still a slight sheen on the water, but the bureau said it was dissipating quickly.

Because the well was natural gas, not oil, experts said the pollution threats were far less than those posed by some previous accidents.

"People don't seem to get excited about natural gas the way they do about oil, because you can't see it, you can't smell it, and it doesn't wash up all over your beaches," he said. "But it's a very potent gas."

BSEE and the Coast Guard are investigating the blowout.

Scientists were focusing on surface water since methane and hydrocarbons are less dense and rise to the surface.

While the BP blowout happened in deep waters, the Hercules well leak provided an opportunity to study hydrocarbon transport in shallower waters, said Nathan Laxague, a researcher with the University of Miami.

"They may wash ashore in a matter of days or be taken out to sea depending on these shallow water air-sea dynamics," he said.

Saturday's research was funded through the Gulf of Mexico Research Initiative launched with roughly $112 million pledged by BP after the 2010 oil spill for the study of the effect of oil and gas on the gulf's ecosystem.