The high court sent the case back to a lower court on a technicality, but noted that Wyoming didn't offer enough evidence that the state oil and gas supervisor was correct to withhold the ingredient lists in response to requests for them. 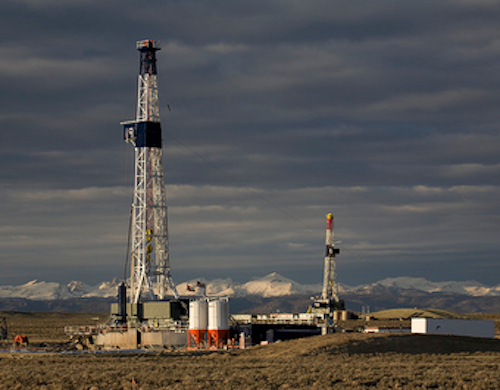 CHEYENNE, Wyo. (AP) — A Wyoming Supreme Court ruling Wednesday will give environmentalists another chance to argue in favor of public disclosure of the ingredients in the chemical products used in hydraulic fracturing in the state.

The high court sent their case back to a lower court on a technicality, but noted that Wyoming didn't offer enough evidence that the state oil and gas supervisor was correct to withhold the ingredient lists in response to requests for them. The lower court will need to review each piece of information sought on a case-by-case basis, the justices ruled, rather than generally uphold the supervisor's judgment.

"Neither this court nor the district court has a sufficient basis to determine whether he acted properly or not," the justices wrote.

Wyoming was the first state to require disclosure of fracking fluid ingredients to state regulators.

But Wednesday's ruling granting a rehearing under the state public records law doesn't necessarily open the way to victory for the Powder River Basin Resource Council, Wyoming Outdoor Council, Earthworks and Center for Effective Government, however. The lower court judge who will rehear the case ruled previously that the lists are protected trade secrets under the justices' preferred definition of a trade secret.

"We will continue the fight in the trial court to ensure that the identity of fracking chemicals — which threaten the water supplies that communities depend upon — cannot be kept secret from the public," said an attorney for the groups, Katherine O'Brien, in a statement.

Wyoming's rules on disclosing fracking fluid ingredients are well-crafted and have been a model for other states, Gov. Matt Mead said in a statement.

"A value of having state rules is that we can be nimble to make changes to the rules or to their implementation if such action is deemed necessary," he said.

The process has been controversial amid concern that fracking gone wrong could taint groundwater with hydrocarbons or fracking fluids containing toxic substances. The industry uses a variety of specially formulated fluids to facilitate fracking.

In 2010, Wyoming became the first state to require companies to disclose to state regulators the ingredients in their fracking fluids.

Since then, the Wyoming agency with primary oversight over oil and gas development, the Oil and Gas Conservation Commission, has been honoring companies' requests to guard their competitive advantage by classifying the ingredients as trade secrets.

Environmentalists argue that knowing the ingredients could help landowners test for substances that could contaminate their groundwater. Companies including Halliburton Energy Services, Inc., which has intervened in the case on the state's side, counter that the ingredient lists alone can be sufficient information for competitors to reverse-engineer their products.

In 2011, the groups filed the first of three records requests against the state seeking copies of the lists. The state oil and gas supervisor denied all three, prompting the groups to sue.

Natrona County District Judge Catherine Wilking ruled in favor of the state and Halliburton last year, saying the oil and gas supervisor was correct to withhold the lists.

The groups appealed to the Wyoming Supreme Court, which sent the case back to Wilking on a technicality. The groups should have asked her to have the oil and gas supervisor justify withholding the lists under the state public records act, rather than ask her to review his decision under the state administrative procedure act, the justices wrote.

The public records act doesn't define trade secrets, but the justices ruled that the oil and gas supervisor and state courts should rely on the trade secrets definition in the federal Freedom of Information Act.

Wilking had ruled that the lists could qualify as trade secrets under three legal definitions, including the FOIA one, the justices pointed out.

They left it to Wilking to reconsider which particular chemical lists should be withheld or disclosed.

"That is not solely a question of law and it cannot be decided on the record before us," they wrote.

The new case was not yet scheduled in her court as of Wednesday.