Alaska voters have retained a new petroleum production tax system that offers hope of increased investment and jobs but drew criticism as a giveaway to already profitable oil companies. 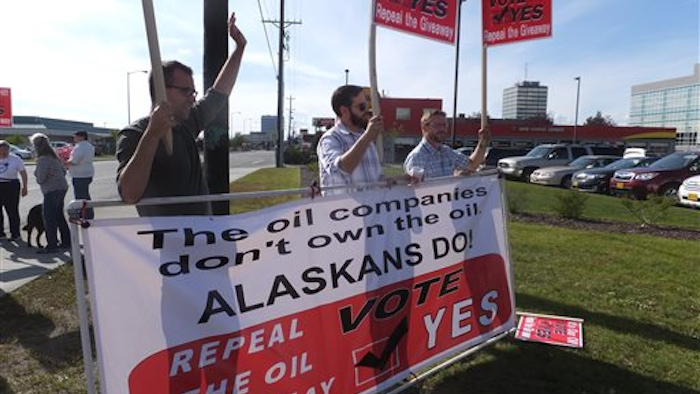 "The results confirm that voters decided to give the oil tax structure a chance to work," said Willis Lyford, spokesman for the Vote No on 1 campaign.

It replaced the system championed by former Gov. Sarah Palin, "Alaska's Clear and Equitable Share," or ACES, which gave tax credits for investment but contained a progressive surcharge that took a larger tax bite from company profits when oil prices increased.

ACES supporters acknowledged flaws in the Palin law but said it should be tweaked, not tossed. They called the Parnell plan a giveaway to oil companies with no provision to guarantee new investment.

"We had to say, 'It's more complicated than that,'" he said.

The campaign was all about fixing the problem of declining oil production, which has seen output in the trans-Alaska pipeline fall from a high of 2 million barrels per day in 1988 to 547,866 barrels in 2012, Lyford said.

The decline has already flattened out, he said. Petroleum companies also linked a tax revision to a liquid natural gas project, he said.

Alaskans voted Aug. 19 on the tax measure, appearing on the ballot as Ballot Measure No. 1. The margin was too narrow to call immediately after the election when at least 33,700 votes remained to be counted.