India freed diesel prices from government control Sunday while raising natural gas tariffs in the biggest-yet reform by Prime Minister Narendra Modi's government, as it aims to boost the country's economy and overhaul its energy sector. 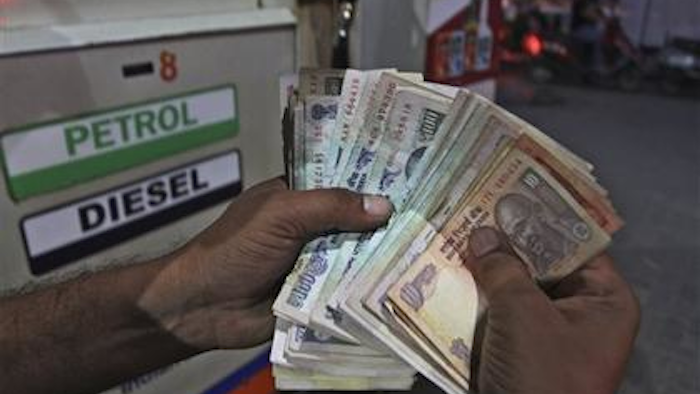 The decision on diesel targets one of India's costliest subsidies for one of the world's dirtiest fuels.

Those subsidies — meant to help poor farmers using diesel-powered water pumps — inadvertently led the country to consume more than four times as much diesel as petrol, at large cost to the national budget. Almost half the country's $23 billion spent on fuel subsidies last year went for diesel, according to the Delhi-based National Institute of Public Finance and Policy.

Meanwhile, India's trade deficit has ballooned, reaching $14.3 billion in September, thanks to years of high international oil prices and a dependency on petroleum-based fuels like diesel, kerosene and gasoline for 22 percent of its entire energy consumption.

While India began tweaking diesel prices last year and rolling back some subsidies, the decision to fully deregulate diesel now appeared timed to a sudden drop in global oil prices last week, easing the burden on Indian consumers. Diesel prices on Sunday, the first day of the new fuel regime, were slightly lower than a day before in major Indian cities like New Delhi, Mumbai and Kolkata.

"It was a very good time to push this through. It was obviously a tactical step," said economist Abheek Barua with the Indian Council for Research on International Economic Relations, a think tank in New Delhi.

"Here's a country that gives enormous political and religious freedom, and yet we have so much difficulty giving economic freedom that reforms have to be done by stealth," Das said. "Modi needs to get out and sell the idea of the market, the fact that price control is harmful in the end for the people."

Modi has pledged to both boost India's economy and provide power to the entire nation within five years — an enormous challenge with at least 300 million Indians still with no power at all, and hundreds of million more lucky to get a few hours a day. Noting that no country in the world has expanded its economic without building electricity capacity, Modi has urged entrepreneurs to move into power generation from solar panels, hydroelectric dams, nuclear reactors or wind mills.

As part of the fuel reforms announced Saturday night, the government also raised natural gas tariffs by 33 percent to $5.61 per mmBtu in an effort to increase incentives for exploring and drilling.

Finance Minister Arun Jaitley asked state governments on Saturday to reconsider taxes "so that consumers are not affected by the price rise."

"People have understood that India's lack of energy was the biggest impediment to growth, and Modi is translating this into action," Barua said. "But they can't just stop here," he said, calling for more reforms including "a serious look" at food subsidies and entitlement programs.

Industry executives welcomed the reforms. The president of the Federation of Indian Chambers of Commerce and Industry called the diesel deregulation an "extremely progressive move."

"In any case, the price of fuel products such as diesel should reflect the true market value, and this would also encourage all users to economize on their diesel consumption and hence aligns with the objective of promoting environmentally sustainable growth," Sidharth Birla said in a statement.

The decision on diesel marks a return to deregulation, after the Congress-led government introduced government control in 2004.

Diesel now powers about 50 percent of India's vehicles as well as generators throughout the retail and industrial sectors, both where grid connectivity is scarce or where power cuts are common. By comparison, the popularity of diesel-powered cars is nearly naught in the United States, where markets also set fuel prices.

"This was long overdue," said Chandrajit Banerjee, head of the Confederation of Indian Industry, according to Press Trust of India. "Also, subsidies should be better targeted and not be for those who don't require it."