The deadly June 13 explosion and fire at the Williams Olefins chemical plant in Geismar released more than 62,000 pounds of toxic chemicals during the accident that killed two workers and injured 114 others, according to a report filed with state environmental regulators. 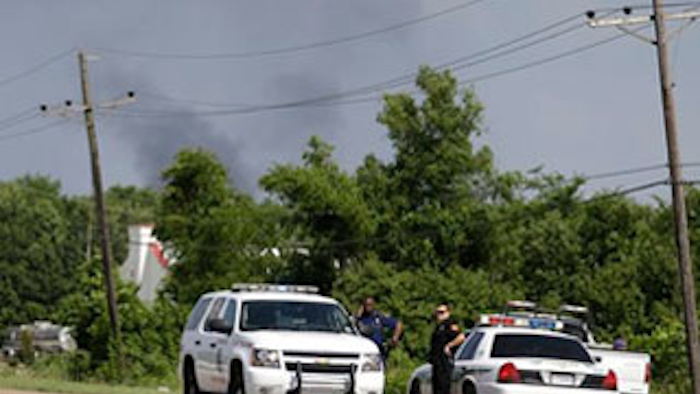 GEISMAR, La. (AP) — The deadly June 13 explosion and fire at the Williams Olefins chemical plant in Geismar released more than 62,000 pounds of toxic chemicals during the accident that killed two workers and injured 114 others, according to a report filed with state environmental regulators.

The cause of the blast and fire are still not known, although investigators are focusing on a heat exchanger and piping associated with the manufacturing column that extracts propylene from natural gas. A company spokesman said Tuesday that two contract workers injured in the blast remained hospitalized.

But a survey of 67 people living near the plant by a team of volunteers working with the Louisiana Bucket Brigade took note of 24 people who reported health problems after the accident, ranging from respiratory and eye irritations to headaches and nausea. The survey was conducted a day after the explosion near the Jackie Robinson playground in Geismar.

The chemical releases included liquids and gases that escaped during the fire, which lasted from 8:37 a.m. until shortly after noon, and gases and particles released from flares until about 4:30 p.m., the report said.

Some water used to fight the chemical fire was captured in tanks or holding areas on site, according to the report, but some of that water left the plant site in storm drains or as sheet flow across the property. A June 18 report by Williams Olefins to DEQ said the wastewater releases may have violated the company's permits for discharge of wastewater, including for benzene, ethylbenzene and toluene.

The fire caused significant damage at the chemical plant, which was undergoing a $400 million expansion. When the expansion is complete, the plant will be able to manufacture 1.95 billion pounds of chemicals a year.

In a news release Monday, the company said the scope of damage remains unclear.

"The plant remains shut down and the expansion work that was occurring is temporarily suspended," said the news release. "Neither the full extent of the damage nor the time needed to make repairs is known."

The accident is under investigation by the federal Occupational Safety and Health Administration, the independent federal Chemical Safety Board, EPA and DEQ.

"At this point it is too early to determine how long the investigation will last, but statutorily, OSHA has up to six months to complete the investigation," said Juan Rodriguez, a spokesman in OSHA's Dallas office.

"It is too early in the investigation to comment," said Rodney Mallett, a spokesman for the state DEQ. "We wouldn't want to jeopardize the ongoing DEQ investigation, much less interfere with the other agencies."

Officials with the Chemical Safety Board on Tuesday did not return requests for information on its investigation.

"We are working in a cooperative and transparent manner with OSHA and CSB through this process," said Keith Isbell, a Williams Olefins spokesman.

On Thursday, U.S. Sen. Barbara Boxer, D-Calif., chairwoman of the Committee on Environment and Public Works, will hold a hearing to examine the events leading up to the explosion as well as an April 17 explosion at a fertilizer manufacturing plant in West, Texas, that killed 15 people, injured more than 160, and destroyed or damaged more than 150 homes and a 50-unit apartment building.

Information from: The Times-Picayune, http://www.nola.com