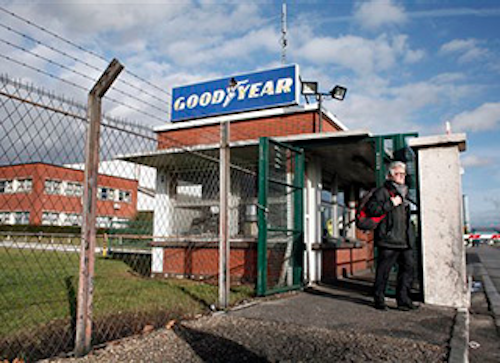 The release outraged union members, who made a bonfire of tires in front of the plant. It also left unresolved the larger problems that have dogged the plant in Amiens in northern France, which Goodyear has tried to sell or shutter for five years.

The plant has become an emblem of France's labor tensions. Workers, having failed so far to save their jobs, seized the plant's director and human resources chief on Monday morning to demand bigger severance packages.

"Boss-napping" has happened sporadically in France in the past, but police generally don't intervene in such incidents, to avoid inflaming tensions while mediators try to settle the labor dispute.

A dozen police officers arrived at the plant Tuesday afternoon, and two went inside the facility. Minutes later, the two bosses walked out and got in an unmarked police car. They did not speak to reporters.

Angry and cursing, Mickael Wamen of the CGT union said afterward: "We were told very clearly ... that if we didn't free these two people that dozens and dozens of riot police trucks would be coming from Paris, would go inside, a riot would break out and they would whack us all and we'd all end up in prison."

"We are already losing our jobs, on top of that to end up in prison..." he continued.

Soon afterward, union representatives spraypainted the word "bad" over the letters "good" in Goodyear on the sign leading into the factory.

Some had hoped for talks Tuesday to try to defuse the dispute, but both sides dug in and refused to negotiate.