Safe tap water gushed from faucets and shower heads in West Virginia on Monday, a welcome sight and sound for a small fraction of the 300,000 people who have not been able to use running water since a chemical spill five days ago. 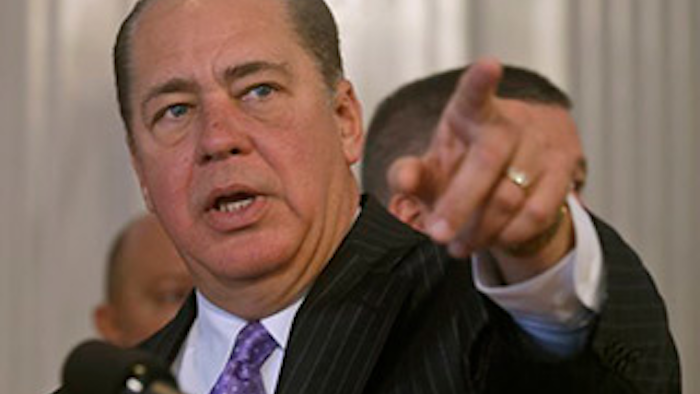 CHARLESTON, W.Va. (AP) — Safe tap water gushed from faucets and shower heads in West Virginia on Monday, a welcome sight and sound for a small fraction of the 300,000 people who have not been able to use running water since a chemical spill five days ago.

It could still be days before everyone in the Charleston metropolitan area is cleared to use the water, though officials said the water in certain designated areas was safe to drink and wash with as long as people flushed out their systems. They cautioned that the water may still have a slight licorice-type odor to it, raising the anxieties of some who believed it was still contaminated.

"I'm not going to drink it. I'll shower in it and do dishes in it. But I won't drink it. I don't think it's (the chemical) all out," said Angela Stone, who started the 30-minute or so process of flushing her system out soon after the ban was lifted.

By Monday evening, officials had given the green light to about 15 percent of West Virginia American Water's customers, and company spokeswoman Laura Jordan said as much as 25 percent of its customer base could have water by the end of the day.

The water crisis shuttered schools, restaurants and day-care centers and truckloads of water had to be brought in from out of state. People were told to use the water only to flush their toilets.

"Finally," said Stone's husband, James Parker. "I can finally take a shower, do dishes and cook some regular meals."

Officials were lifting the ban in a strict, methodical manner to help ensure the water system was not overwhelmed by excessive demand, which could cause more water quality and service problems. An online map detailing what areas were cleared showed a very small portion in blue and a vast area across nine counties still in the 'do not use' red.

Customers were credited with 1,000 gallons of water, which was likely more than enough to flush out a system. The average residential customer uses about 3,300 gallons per month.

Some people said they weren't worried about the odor.

"It's not going to bother me as long as we know it's clean," said Peter Triplett, a state library commission worker whose home was near the first area allowed to use water. "It's been rough going."

The first area cleared was downtown Charleston, the state capital and its largest city. Hospitals were open and flushing out systems, but schools were to stay closed Tuesday.

The water crisis started Thursday when a chemical used in coal processing leaked from a Freedom Industries plant into the nearby Elk River.

Complaints came in to West Virginia American Water about the odor and officials discovered the source was the chemical 4-methylcyclohexane methanol that spilled out of a 40,000-gallon tank.

In all, state officials believe about 7,500 gallons leaked from the tank. Some of the chemical was contained before flowing into the river and it's not clear exactly how much entered the water supply.

Federal authorities, including the U.S. Chemical Safety Board, have opened an investigation.

Charleston attorney Anthony Majestro represents several businesses that lost money while shut down and said he has lost count of the numerous lawsuits filed over the spill.

Over the past few days, tests have showed that levels were consistently below a toxic threshold, and in some samples, there was no trace of the chemical at all.

Some people put plastic bags around faucets so that they were reminded not to use the water. Others have left town to take a shower and find an open restaurant.

Steve Graham, who works at Union Mission in downtown Charleston, said they handed out more than 150 pallets of bottled water packs since the weekend. Graham said the water ban slipped his mind Monday night.

"I got that mouthful of water in the middle of the night just waking up, and instantly you got that candy taste in your mouth," he said.

Graham said he rinsed his mouth out with bottled water and was fine.

Only 14 people exposed to the contaminated water were admitted to the hospital, and none was in serious condition. No fish kills were reported and there was no impact to aquatic life or wildlife, state officials said.

The chemical, even in its most concentrated form, isn't deadly. However, people were told they shouldn't even wash their clothes in affected water, as the compound can cause symptoms ranging from skin irritation and rashes to vomiting and diarrhea.

"We have mitigated the risk, we believe, in terms of further material leaving this facility," he said then.