The facility whose chemical spill contaminated the water supply for 300,000 West Virginia residents was barely scrutinized, flying largely under the radar of government regulators who viewed it as a low-risk operation — but in reality, a problem at a key holding wall went undetected and unreported at Freedom Industries Inc. 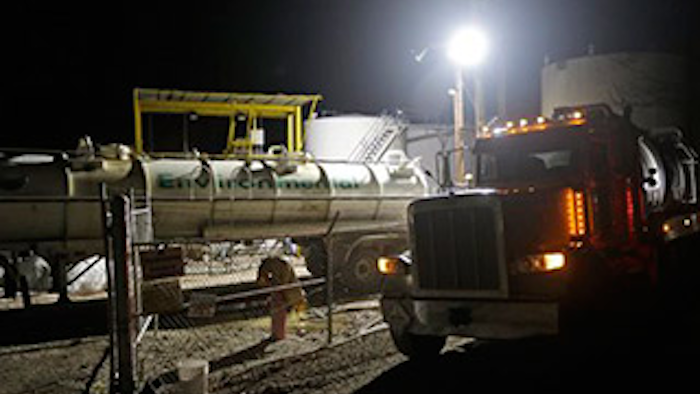 CHARLESTON, W.Va. (AP) — The facility whose chemical spill contaminated the water supply for 300,000 West Virginia residents was barely scrutinized, flying largely under the radar of government regulators who viewed it as a low-risk operation — but in reality, a problem at a key holding wall went undetected and unreported at Freedom Industries Inc.

The chemicals stored at Freedom's facility near the Elk River are not considered hazardous enough by regulators to prompt routine inspections. On a normal day, it never created chemical waste that went into the environment. As a result, the chemical storage terminal was a low priority for regulators, who must pick and choose how to allocate scarce manpower when enforcing environmental laws.

"I think that the loophole that this facility fell into is because it was not a hazardous material, it flew under the radar," said Randy Huffman, cabinet secretary of West Virginia's Department of Environmental Protection, which enforces environmental laws.

Freedom's storage terminal holds millions of pounds of chemicals — including some used in coal processing — just a mile and a half upstream from pipes that take in water for a public drinking supply. The distance left little opportunity for chemicals to dilute in the event of a spill.

And those chemicals were stored behind a brick-and-concrete block dike that seems to have had structural problems — an issue the company apparently was aware of. A state official says the president of Freedom told regulators that $1 million had been put into an escrow account to fix the wall that ultimately failed to hold Thursday's spill, which resulted in a five-day ban on tap water. The ban was lifted for some areas Monday afternoon.

State environmental officials would not have seen the dike problems — they say they never had reason to inspect the site.

Containment dikes are supposed to be a last line of defense against spills, preventing chemicals from flowing into the surrounding environment. Concrete containments are susceptible to cracking over time and need to be maintained, said Susan Burns, a professor of civil engineering at Georgia Tech. She was not familiar with the layout or equipment at Freedom Industries.

"A secondary containment barrier, assuming they are properly engineered and maintained, they typically work quite well," she said. "It's unusual for us to have these types of failures."

The situation at Freedom is probably not unique. On paper, the chemical storage terminal in West Virginia — like similar sites nationwide — simply did not fall into any inspection program, authorities said. Neither the U.S. Environmental Protection Agency nor the state DEP sent inspectors before the spill, agency officials said.

Because the site only stored and did not manufacture chemicals, it did not need permits to discharge pollutants into the air or water. State officials said it was not required to have a ready-to-go plan for containing spills. It was not cited for any environmental violations, according to a federally run database. The last inspection report for the site dates to 2001, when it was a refinery owned by a different company and operating under more stringent rules, state environment department spokesman Tom Aluise said Monday. It is possible the agency could find additional reports as it digs through its records. Freedom didn't buy the property until last month.

Officials at the Occupational Safety and Health Administration once scheduled an inspection in 2009, then canceled it after realizing the company did not fall under any of its special emphasis programs, OSHA spokesman Jesse Lawder said.

Although regulators never visited, it appears company officials were aware of issues with the containment dike. Freedom Industries President Gary Southern told state regulators that $1 million was put into an escrow account to repair the wall, said Mike Dorsey, the DEP's director of emergency response and homeland security. Company officials have not returned calls seeking comment on the condition of the dike.

"The wall is an old cement block wall, and there's some problems with the mortar in a couple places," Dorsey told The Associated Press. "And it came out through that."

On an average day last year, the facility was keeping anywhere from about 11.4 million to nearly 63.5 million pounds of 10 chemicals in above-ground storage tanks and at least one warehouse, according to an inventory sheet filed with state regulators in February 2013. The AP obtained those inventories using West Virginia's open-records law.

In addition to the coal-cleaning chemical that spilled, 4-methylcyclohexane methanol, the materials on site included such chemicals as calcium chloride and soda ash, which is sometimes used to treat drinking water.

Experts say many of the chemicals are used in industrial operations and not considered extremely hazardous, though the chemical that spilled is harmful if swallowed and can cause skin and eye irritation.

"The chemicals on this list would not be chemicals where a red flag would go up and people would be extra cautious to ensure this is housed safely," said Rolf Halden, director of the Center For Environmental Security at Arizona State University, who reviewed the inventory list.

The chemicals at the property included up to 1 million pounds of 4-methylcyclohexane methanol, which is used to separate bits of rocks and clay from mined coal. Somehow, Tank 396 suffered a 1-inch hole in its bottom, allowing the chemical to pool on the ground and somehow go through the dike, contaminating the water.

"It's not like it filled up the whole thing like a bathtub or a swimming pool," Dorsey said.