Police in a St. Louis suburb where a recycling plant explosion killed two people say it was caused by a mortar round. 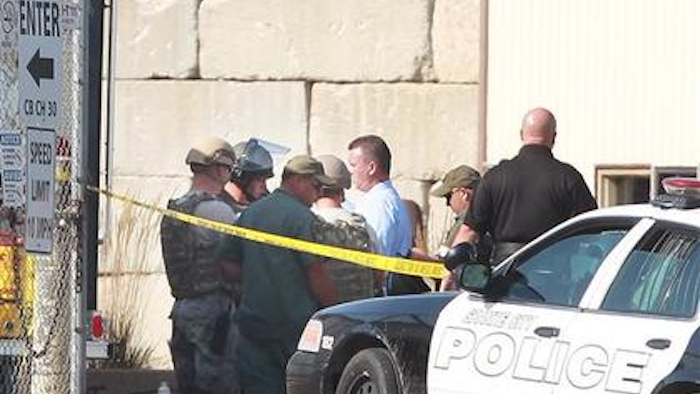 GRANITE CITY, Ill. (AP) — Police in a St. Louis suburb where a recycling plant explosion killed two people say it was caused by a mortar round.

Granite City Police Chief Rich Miller says Totall Metal Recycling has contracts with the military. He says it's not unusual for the plant to have items such as "military engines and ammunition casings."

A statement says company officials are cooperating in the investigation and extended their condolences to the families of the victims.

Police say the explosion occurred about 6:25 a.m. outside the plant.

Authorities have recovered the bodies of the two victims. They have not been identified.

A third person was injured and taken to a hospital.

THIS IS A NEWS UPDATE. The earlier story is below.

Authorities were working to secure the site of a metal recycling plant in an Illinois suburb of St. Louis Monday after an explosion killed two people and injured at least one more, police said.

Bomb technicians were combing the site of Totall Metal Recycling in Granite City. Emergency responders, who initially couldn't enter the area for fear of another explosion, had recovered the bodies of the victims by early afternoon, police Maj. Jeff Connor said.

Connor said it was unclear what caused the explosion outside the plant. Granite City is about 8 miles northeast of St. Louis.

The company recycles items including computers and automobiles and, according to its website, also deals with the ammunition industry. More than 160 people work at the plant, according to the website.

A person who answered the company phone Monday morning said no one could comment; a call to the firm went unanswered Monday afternoon.

The Belleville News-Democrat reported that firefighters were alerted to the explosion about 8 a.m.

The secretary of state's bomb squad had been dispatched to the scene to assist an explosive ordnance disposal unit from Scott Air Force Base to ensure "there are no other explosive or dangerous devices and, if there are, to render them safe," the office's spokesman, Henry Haupt, said.

The FBI and the Bureau of Alcohol, Tobacco, Firearms and Explosives were also on the scene, Haupt said.

The St. Louis Post-Dispatch reported that Connor said a third person was injured and taken to a hospital, but the condition of the person was not known. Connor told the newspaper there were no additional victims.

Prather Elementary School, with about 500 students in kindergarten through 4th grade, is about half a mile west of the plant. Granite City School Superintendent Jim Greenwald said the students reported to school shortly after the accident occurred and school was proceeding normally.

Greenwald said the principal had decided to keep the students inside for recess Monday, but authorities had assured the district there were no chemicals in the air or other hazards.