California To Ban Some Pesticides Near Schools

California is moving to ban farmers from spraying pesticides into the air near schools and day care centers under a newly proposed rule that will be among the nation's toughest, regulators told The Associated Press on Thursday. 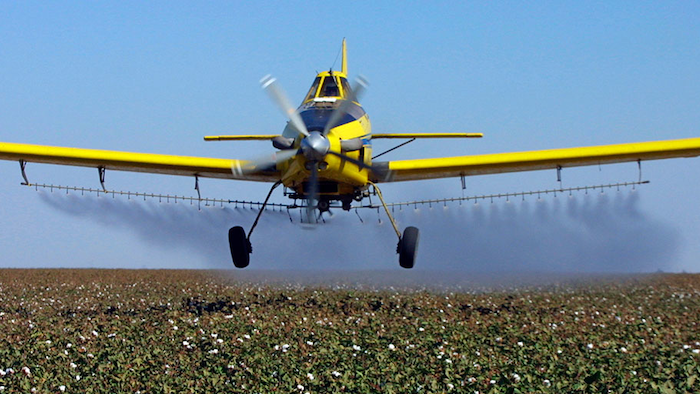 FRESNO, Calif. (AP) — California is moving to ban farmers from spraying pesticides into the air near schools and day care centers under a newly proposed rule that will be among the nation's toughest, regulators told The Associated Press on Thursday.

Crop dusters flying over fields, air-blasters spraying orchards and fumigants that risk blowing onto campuses will no longer be allowed within a quarter-mile of those facilities, said Brian Leahy, director of the state Department of Pesticide Regulation.

Some counties already require such buffer zones, but the rule will create uniformity statewide, better protecting students and their teachers from illness, he said. The rule will safeguard 3,500 schools and day cares, affect roughly 2,500 California farms and carry fines of up to $5,000, officials said.

California grows nearly half of the nation's fruits, nuts and vegetables. It is also home to nearly 40 million people, making it the most populated state and necessitating stricter pesticide rules because of its close quarters, officials said.

The proposal is angering farmers already under pressure from five years of drought and rising costs, such as a law recently signed by Gov. Jerry Brown that grants farmworkers the same rights to overtime pay as other employees.

Farmers say they are being unfairly targeted because schools often build campuses on cheaper land outside town, where they have tilled the soil long before students arrived.

Farmers are mindful of neighboring schools and don't spray when it could harm children, said Bruce Blodgett, executive director of the San Joaquin Farm Bureau Federation. He said he didn't know of instances where children were sickened by pesticides from farmers he works with.

"It seems like they're almost inventing an issue to solve," Blodgett said. "Clearly, it's one that does not exist."

But officials say roughly 34 people were sickened in five instances throughout the state between 2005 and 2014 when pesticides drifted onto campuses, demonstrating a need for stricter regulations.

In the largest case, 11 students and their teacher at Cesar Chavez Elementary School in Monterey County became ill in April 2009 when a helicopter sprayed a field of spinach near the students who were outside for a physical education class, officials say.

They vomited and experienced burning eyes, headaches and irritated skin, officials say. The company hired to spray the pesticide had to pay a $700 fine.

A formal announcement of the rule is expected Friday and opens a public comment period through mid-November. Regulators plan to formally adopt the regulation that will be enforced beginning in September 2017.

Under the rule, farmers will be limited to spraying near schools at night and on weekends, when students are not on campus.

Pesticides applied to crops without the possibility of drifting into schools can be used anytime, but in many cases the farmer will be required to notify the neighboring school in advance.

"Our schools already do a great job of communicating with students, parents, staff and the neighboring community," Tom Torlakson, California's public schools superintendent said in a statement. "This regulation will provide more information to schools and let them continue communicating with all concerned parties."

The proposal should be more rigorous, said Paul Towers, spokesman for the Pesticide Action Network, which advocates for stricter protections from the chemicals used on food.

Officials should prohibit farmers from spraying pesticides within 1 mile of school at any time because some harmful pesticides linger for hours or days, he said.

Regulators focus on preventing immediate illnesses, but he said the bigger concern is protecting children from long-term risk of cancer, brain development and reproductive issues.